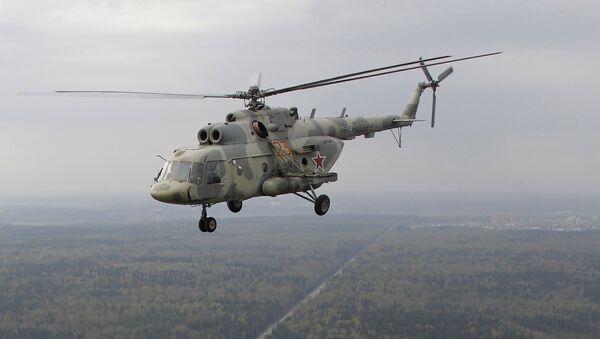 © Sputnik / Ilya Pitalev
Subscribe
International
India
Africa
The US Department of Defense said Thursday it plans to sidestep a Congressional ban to purchase 30 helicopters from Russian state-owned defense firm Rosoboronexport, despite objections from US lawmakers who allege that the firm has equipped the Syrian government to commit brutal crimes against civilians.

WASHINGTON, April 4 (By Maria Young for RIA Novosti) – The US Department of Defense said Thursday it plans to sidestep a Congressional ban to purchase 30 helicopters from Russian state-owned defense firm Rosoboronexport, despite objections from US lawmakers who allege that the firm has equipped the Syrian government to commit brutal crimes against civilians.

The 2013 National Defense Authorization Act, approved by Congress last year, includes an amendment that prohibits financial contracts between the United States and Rosoboronexport, except when the Secretary of Defense determines that such arrangements are in the interest of national security.

“Given current timelines, the department has determined that Rosoboronexport is the only viable means of meeting ANSF requirements” for the helicopters, Gregory said.

The contract totals $690 million, most of which would go to the Russian arms maker, he added.

In February, US President Barack Obama announced plans to reduce the number of US troops in Afghanistan from 66,000 to 34,000 over the next year, leaving Afghan forces with an increased role in their nation’s security.

Many of the Afghan forces have already been trained to operate the Russian aircraft. Switching to a new platform would delay the readiness of their rotary wing division by at least three years while crews get training and experience on a new system, Gregory said.

A bipartisan Congressional group wrote a letter to Defense Secretary Chuck Hagel last week in which they objected to the ongoing business relationship between the Russian arms company and the Pentagon.

“What is the national security justification of continuing business with Rosoboronexport?” they asked in the letter.

“Russia continues to transfer weapons through Rosoboronexport to the regime of Bashar al-Assad in Syria,” they continued. “Since the Syrian uprising began, Russia has continued to serve as the Assad regime’s chief supplier of weapons, enabling the mass murder of Syrian citizens at the hands of their own government.”

Russia, however, has insisted that the deliveries are legal under international law and that it is not supplying Syria with offensive weapons. Moscow has also questioned the composition and goals of the various armed groups fighting the Assad regime.

US Rep. Jim Moran, who co-authored the amendment, said Rosoboronexport had supplied nearly $1 billion in arms to Assad’s government between 2011 and 2012, including high-explosive mortars, sniper rifles, ammunition and refurbished attack helicopters.

Public records show that some of the representatives who signed the letter and sponsored the amendment–including Moran, Rep. Kay Granger and Rep. Rosa DeLauro—have received campaign contributions from US defense contractors.

But Moran’s spokeswoman, Anne Hughes, described any implication that the lawmakers’ concern is more about campaign contributions than arms for Syria as “laughable.” Representatives of the other lawmakers did not respond to requests for comment.

“The objections are understandable, the US defense industry needs contracts. … But from a cost-benefit analysis, Russian helicopters are a better deal,” Simon Saradzhyan, a security expert at Harvard University’s Belfer Center for Science and International Affairs, told RIA Novosti on Thursday.

The Russian helicopters, he said, are generally not as sophisticated or advanced as those made in the United States, making them arguably more suitable for use by Afghan security forces.

“This is the Russian competitive edge,” Saradzhyan said. “They cost less and they are easy to maintain. This is how Russian arms supporters make their sales speech.”

In their letter to Hagel, the lawmakers asked what steps the Pentagon had taken to consider alternative helicopter suppliers. They also requested that the department prepare a detailed briefing and present it to Congress before taking any action on the pending contract.

“He will of course respond.”