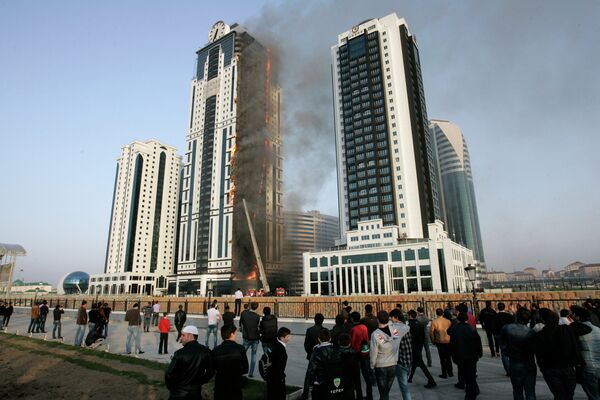 The tallest skyscraper of the Grozny City complex caught fire in Chechnya’s capital on Wednesday.

A spokesman for the Emergencies Ministry said no one was killed or injured in the fire, while dozens of people were evacuated from the 145-meter (475-foot) skyscraper and nearby buildings.

“More than 100 firefighters and 16 fire engines are battling the blaze,” the spokesman said.

A police source told RIA Novosti that all floors of the skyscraper except the ground one are on fire. The record-breaking clock remained intact and kept showing correct time for two hours but stopped at 8:30 p.m. local time.

It was not immediately clear what caused the blaze.

According to some Russian-language media, in February Chechen leader Ramzan Kadyrov presented French movie star Gerard Depardieu with a five-room apartment in the skyscraper, which is the tallest building in Russia outside Moscow.  However, a security guard of the Grozny City complex told RIA Novosti that Depardieu's apartment was in a neighboring 27-story building.

Kadyrov said Chechen authorities will restore the skyscraper, which was not seriously damaged inside.

"We will restore this building with God's help and use the most state-of-the art technologies to make it even better and more beautiful," Kadyrov said on his Instragram page.

Updated with details on Depardieu's apartment and Kadyrov's comments.