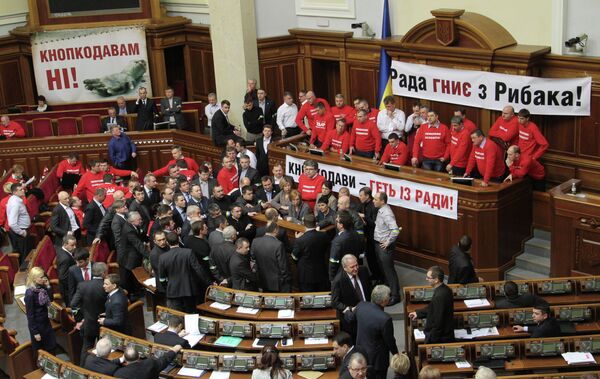 Ukrainian opposition lawmakers have blocked the speaker’s rostrum and presidium of the country’s parliament after the pro-presidential majority refused to set up the date for mayor and city council elections in the capital Kiev.

KIEV, April 2 (RIA Novosti) - Ukrainian opposition lawmakers have blocked the speaker’s rostrum and presidium of the country’s parliament after the pro-presidential majority refused to set up the date for mayor and city council elections in the capital Kiev.

This is the third such incident this year in the current Verhovna Rada, elected on October 28, 2012. On February 5-22, the parliament’s work was suspended for more than two weeks as the opposition blocked the rostrum demanding to ensure that every lawmaker votes individually. On March 5, opposition factions in the Ukrainian parliament blocked the rostrum in protest against plans to dismiss lawmaker Serhiy Vlasenko.

At a session on Tuesday, the majority of lawmakers voted against setting June 2 as the election date and requested the Constitutional Court to voice its opinion on the issue.

The opposition accuses the pro-presidential Party of Regions of deliberately delaying the elections for fear of losing them. Opposition enjoys great support in the capital, with boxing heavyweight champion Vitali Klitschko being the city’s most popular politician.

Thousands of opposition activists gathered around the parliament building on Tuesday demanding for the election date to be set.

Popov took over as the city’s de-facto chief in November 2010, following the resignation of former Kiev Mayor Leonid Chernovetsky, known for his eccentric behavior.

Among Chernovetsky’s bizarre initiatives, which earned him a nickname “Cosmos,” was the sacking of the Kiev Zoo chief for his failure to find a mate for its male elephant and posing in tight swimming trunks in front of reporters to show he was physically and mentally fit. He also proposed introducing a $6 entry fee to city cemeteries and a tax for bachelors, but did not succeed.