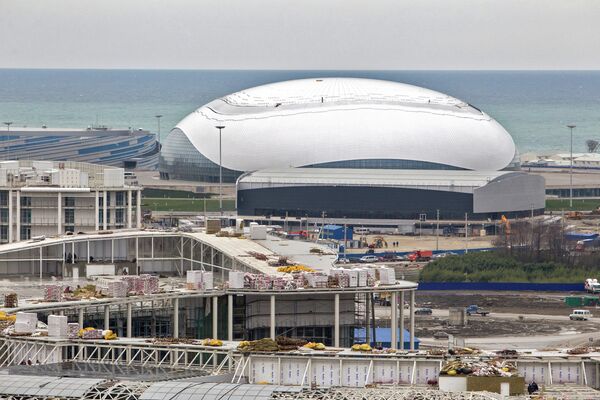 © RIA Novosti . Mihail Mokrushin
/
Go to the photo bank
Subscribe
A senior Russian government official dismissed on Monday allegations by Greenpeace that Russia is failing to dispose of construction waste properly as it prepares for the 2014 Winter Olympics in Sochi.

SOCHI, April 1 (RIA Novosti) – A senior Russian government official dismissed on Monday allegations by Greenpeace that Russia is failing to dispose of construction waste properly as it prepares for the 2014 Winter Olympics in Sochi.

Waste from construction sites in Sochi is currently being buried in the nearby town of Belorechensk, said Kozak, who is in charge of preparation for next year’s Winter Games in the subtropical city.

The buried waste will later be processed at a recycling facility in Belorechensk that is currently under construction, Kozak said. “There are no problems with that,” he said.

Greenpeace complained to the International Olympic Committee last month, saying Russia is failing to meet its obligations to implement the Zero Waste principles during Olympics-related construction.

The latest cleanup plan for the city, passed by the municipal administration in January, discourages waste separation while promoting waste incineration, which does not correspond to the Zero Waste principles, Greenpeace said in a press release.

Officials at Greenpeace Russia contacted by RIA Novosti dismissed Kozak’s claim that the country is on track to implement Zero Waste in Sochi.

“He seems to be confused, because Zero Waste has got nothing to do with the waste removal he is talking about,” said Ivan Blokov, campaign director for Greenpeace Russia.

Zero Waste is impossible to implement without waste separation, which the government is reluctant to introduce, said the head of Greenpeace Russia’s toxic waste program, Rashid Alimov.

The Russian government has repeatedly pledged to introduce waste separation in the country, but has so far largely failed to do so. Only about 20 percent of the 7 billion tons of waste that the country produces each year is recycled, according to a mid-2012 report by the Federal Inspection Service for Natural Resources Use.