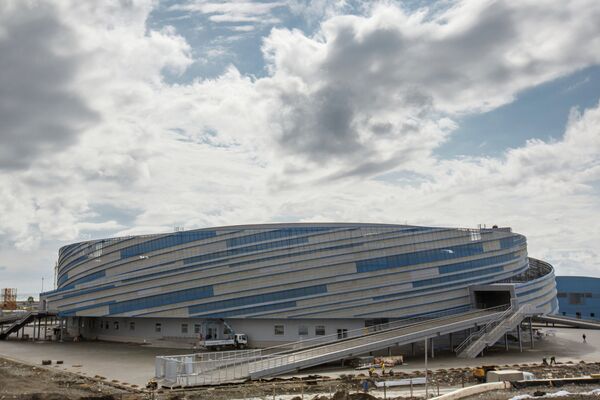 © RIA Novosti . Mikhail Mokrushin
/
Go to the photo bank
Subscribe
Russian President Vladimir Putin called Saturday for one of next year’s Olympic ice hockey arenas in Sochi to be turned into a training base for child athletes.

SOCHI, March 30 (R-Sport) - Russian President Vladimir Putin called Saturday for one of next year’s Olympic ice hockey arenas in Sochi to be turned into a training base for child athletes.

The 7,000-capacity Shayba arena will host women’s hockey next February but its future after the Games is unclear, with no legacy plan yet decided.

“I propose, after the end of the Olympics, creating an all-Russian children’s sports and education center on the basis of the small ice arena,” Putin said.

The site will be remodeled “so children can live and learn here,” he added and suggested it be the hub of a wider program coaching talented young athletes in ice and snow sports.

“I’m talking about those sorts of sports like hockey, ice skating. In the mountain cluster [of Olympic venues] it’s cross-country skiing, biathlon, Alpine skiing, snowboarding. It should be a federal facility with federal budget financing.”

He added upcoming budget talks should consider finding more premises for the children's sports center. "It's possible both to buy something or to build something," he said.

The Shayba arena was originally designed so that it could be dismantled and moved to another city after the Games end. The idea of moving it to a site in the Caucasus was proposed by influential lawmaker Igor Ananskikh earlier this month.

Legacy has proven a thorny issue for many Sochi 2014 venues.

The Fisht Olympic Stadium will become a venue for the 2018 football World Cup, while the main hockey arena, the Bolshoi Ice Dome, will continue to host hockey, but other venues' futures remain unclear.

The Iceberg Skating Palace is caught in a dispute between different government officials, some of whom want to keep it as a center for figure skaters, and others who want to convert it into a velodrome to boost Russia’s ailing track cycling program.

The main long-track speedskating venue, the Adler Arena, will be an exhibition center, while the 3,000-capacity Ice Cube for curling’s future is unclear, although earlier plans to move it appear to have been dropped.

In the mountains, the Alpine venues will revert to being ski resorts, while Russia’s cross-country skiing chief Elena Valbe has raised doubts about the commercial viability of the Laura cross-country and biathlon complex under plans to turn it into a tourist resort.