US Ambassador to Moscow McFaul: Learning to be Less Clear 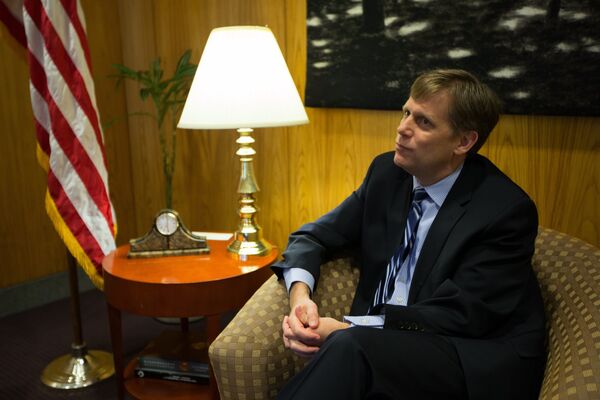 US Ambassador to Russia Michael McFaul’s official residence in Moscow is Spaso House, a Neoclassical Revival mansion that served as the setting for a ball hosted by the devil in Mikhail Bulgakov’s novel, “Master and Margarita.” An apt home, some might say, for a man who has been demonized by state-run media and pro-Kremlin officials since his arrival in the Russian capital a little over a year ago.

MOSCOW, March 28 (Marc Bennetts, RIA Novosti) – US Ambassador to Russia Michael McFaul’s official residence in Moscow is Spaso House, a Neoclassical Revival mansion that served as the setting for a ball hosted by the devil in Mikhail Bulgakov’s novel, “Master and Margarita.” An apt home, some might say, for a man who has been demonized by state-run media and pro-Kremlin officials since his arrival in the Russian capital a little over a year ago.

A Stanford University professor and Hoover Institution fellow known for his academic work on Ukraine’s 2004 Orange Revolution, McFaul arrived in Moscow in January 2012 amid unprecedented protests against Russian President Vladimir Putin’s long rule. Formerly President Barack Obama’s special advisor on Russia, McFaul was only the second non-career diplomat to be appointed ambassador to Moscow in the last three decades. The break from tradition and McFaul’s academic past triggered suspicions that he had been selected for his expertise in regime change, rather than his authorship of a much-vaunted, now moribund 2009 “reset” in US-Russia relations.

In only his second day on the job, McFaul was accused on state television of seeking to instigate a popular uprising in Russia. “Mr. McFaul has come to Russia to work at his specialty – that is, to finish the revolution,” rasped Channel One presenter Mikhail Leontiev, in a reference to the new ambassador’s 2002 book “Russia’s Unfinished Revolution.”

McFaul’s arrival came around a month after Putin had angrily accused US Secretary of State Hillary Clinton of “giving a signal” to Russia’s opposition movement. Over the next year, the US State Department – commonly referred to in Russian as “Gosdep” – would gain a reputation as an all-powerful, nefarious organization set upon Russia’s ruin.

“It was unexpected for sure, because of our policy toward Russia, which we thought was different and fundamentally a departure from this Cold War stuff,” McFaul said in an interview at the embassy this week.

“We were surprised, as a government, to have ‘Gosdep’ become this evil word. And personally, as the author of the reset, it was rather surprising to land here and be in this different configuration,” he went on, still clearly dismayed by his less than warm welcome.

A Rhodes scholar who first travelled to the Soviet Union in 1983 (“I stood in line for an hour and a half to eat really bad pizza”), McFaul’s lack of diplomatic experience saw him struggle – initially at least – to adopt the bland, ambiguous terms utilized by envoys the world over.

In his first year on the job, McFaul – known as a charismatic, candid speaker – lashed out at a pro-Kremlin news crew that had accosted him on the street, calling Russia a “wild country,” and told Moscow university students that Russia had “bribed” the former Soviet republic of Kyrgyzstan to close a US military base there.

“As a professor, as a teacher, my job was to communicate very complex political and economic phenomenon in oversimplified models or theories or metaphors,” he explained. “That is not always an asset when dealing in diplomacy.”

Now, instead of drawing a salary “for my opinions and analysis” he must “represent President Obama, our administration and the American people.”

“It’s taken some getting used to,” he admitted, with a shrug. “It’s better to be less clear and a little less…,” he searched for the right word: “colorful with some of the expressions we use.”

McFaul has enjoyed (or suffered) an extraordinarily high-profile image for an ambassador, regularly appearing on talk shows to refute anti-US allegations and building up a large online following with his zealous tweeting, part of the State Department’s digital diplomacy.

But Sergei Markov, a Kremlin-connected analyst who co-authored a 1993 book with McFaul on post-Soviet political movements, believes the US ambassador would have been better advised to simply ignore accusations that he had been sent to foment revolution in Russia.

“The Kremlin used his image as an expert on revolution as part of an effective anti-American campaign,” he said. “He should have simply ignored everything that was said and not reacted at all. Instead he was going on TV shows, radio shows, and so on.”

Markov believes McFaul’s tendency to speak out is related not to his lack of diplomatic experience but to his temperament. “McFaul is not a diplomat, of course,” he said, “but he has a lot of political experience. He reacts because he is a very emotional person. “

Now, McFaul seems to have tempered his predilection for straight speaking.

“Those are good questions for political scientists,” he said, asked about potential fallout from Washington’s criticism of the Kremlin on human rights and democracy. “When I get back to Stanford, I’d love to…,” he began, before changing tack: “Seriously that’s an analytical question about what’s going on here. I haven’t thought through all that.”

One of the thorniest issues in US-Russian relations in recent years has been Moscow’s virulent opposition to the deployment of a NATO missile shield in Eastern Europe. But when Washington unexpectedly scrapped plans to place missiles in Poland earlier this month, US officials appeared to go out of their way to deny the move had anything to do with the Kremlin’s concerns.

McFaul dismissed the idea that this was a missed diplomatic opportunity to massage Moscow’s ego. The missile decision “had nothing to do with Russia,” he insisted. “To say otherwise would not be true.”

He laughs out loud at the suggestion that diplomats occasionally bend the truth.

“I’m not slippery with the truth,” he countered. “Maybe that’s part of my problem.”

Another bone of contention that has crippled bilateral ties on McFaul’s watch has been the US Congress’ passage late last year of the Magnitsky Act, a law introducing sanctions for Russian officials deemed guilty of human rights abuses. Russia retaliated by banning American adoptions of Russian children.

Both the White House and the State Department had opposed the Magnitsky law. But Russian officials and state-run media responded with a new wave of anti-American sentiment, stoked by the February death of an adopted Russian toddler in Texas. Amid the row, McFaul was called into Russia’s parliament but declined to obey what he described as an “order.” He is due to discuss the adoption issue with civil society groups at Russia’s Public Chamber on April 4.

McFaul was reluctant to discuss the anti-US campaign, but countered Russian officials’ claims that Washington had sought to cover up the Texas toddler’s death.

“Sometimes it’s misunderstood in this country that we have a different structure of government. The sheriff in Texas does not report to the president of the United States,” he said. “We are all immigrants in America. The child who tragically died was an American citizen. It didn’t even occur to the sheriff that he needed to go and call the State Department – because he was an American kid.”

While Moscow and Washington maintain cooperation on some key strategic security issues, the Magnitsky affair hammered a big, rusty nail into Obama’s reset – a policy marred from the outset by a now infamous translation error.

“You got it wrong,” Moscow’s top diplomat, Sergei Lavrov, told Clinton in Geneva in 2009 after she handed over a gift-wrapped red button labeled “peregruzka” – Russian for “overload” – instead of “perezagruzka,” the “reset” Obama had been hoping for.

“We were all responsible for that mistake,” McFaul admitted, sharing a conspiratorial smile with embassy colleagues. “I was there at that meeting too.”

But he was quick to find a silver lining: “In an ironic way, the mistake of that button created more attention to what we were trying to do. […] Now everyone knows the reset, right? It’s a foreign policy term.”

“And, as the president said to me – we all make mistakes.”