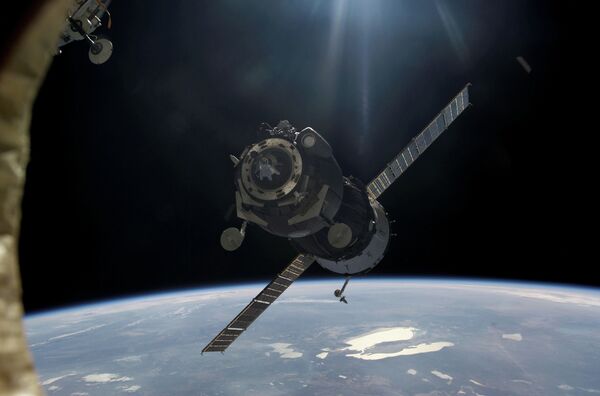 © NASA
Subscribe
The Soyuz TMA-08M spacecraft, carrying new crew members to the International Space Station (ISS), docked with the station as scheduled on Friday, a spokesman for the Russian space agency Roscosmos said.

"The docking was held by command from Earth at the designated time, in automatic regime," the source said.

The cosmonauts will open the door between the craft and the station within the next few hours.

The blastoff of the Soyuz-FG rocket, carrying the Soyuz TMA-08M spacecraft, took place as scheduled, at 00:44 Moscow time at the Baikonur Space Center in Kazakhstan. The spacecraft performed the first-ever manned flight under a new six-hour flight program.

The Soyuz crew comprises Russian cosmonauts Pavel Vinogradov, Alexander Misurkin and Christopher Cassidy of NASA, who will join their colleagues Roman Romanenko of Russia, Chris Hadfield of Canada and Thomas Marshburn of the United States.

They will also carry out 42 scientific experiments.

Vinogradov and Kotov have already taken two spaceflights. For Cassidy, this is the second spaceflight in total, but the first one onboard Russia’s Soyuz spacecraft.