Russia to Deliver First Kilo Class Sub to Vietnam in 2013 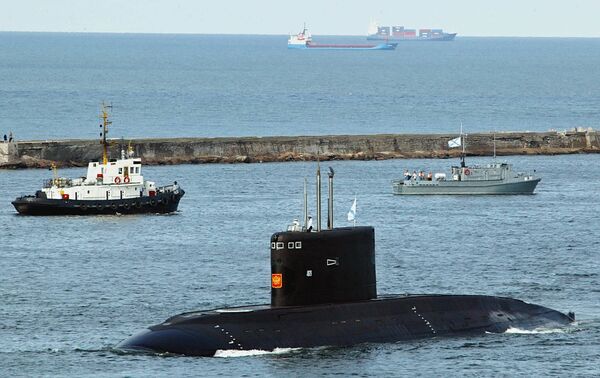 © RIA Novosti . Igor Chuprin
/
Go to the photo bank
Subscribe
The first of six Varshavyanka class (Project 636M) diesel-electric submarines will be delivered to Vietnam in 2013 as scheduled, the submarine designer said on Friday.

LANGKAWI (Malaysia), March 29 (RIA Novosti) – The first of six Varshavyanka class (Project 636M) diesel-electric submarines will be delivered to Vietnam in 2013 as scheduled, the submarine designer said on Friday.

“The first vessel is undergoing sea trials. It will be delivered to Vietnam this year,” Rubin design bureau general director Igor Vilnit told reporters at the LIMA-2013 arms show in Malaysia.

Vietnam ordered a fleet of six Russian-made submarines in 2009 in a step seen as an effort to counterbalance China’s expanding maritime influence in the region. The contract, which also stipulates the training of Vietnamese submarine crews in Russia, is reportedly worth $2 billion.

Vilnit says construction on the craft is going according to the schedule specified in the contract.

The submarines are being built at the Admiralteiskie Verfi shipyard in St. Petersburg. All six boats are due for delivery by 2016.

The submarines, which feature 533-milimeter torpedo tubes and are armed with torpedos, mines, and Kalibr 3M54 (NATO SS-N-27 Sizzler) cruise missiles, are mainly intended for anti-shipping and anti-submarine missions in relatively shallow waters.