NATO Secretary General Anders Fogh Rasmussen said on Wednesday that he did not see a joint Russia-NATO missile shield in Europe as the most efficient option.

Rasmussen was asked to assess the potential of missile defense systems under joint Russia-NATO command during his address at an International Model Russia-NATO council meeting in Moscow.

“I do not think the most efficient way would be to have a unified, integrated system,” Rasmussen said, adding that “the right way forward would be to have a Russian system and a NATO system, but to make sure that these two systems work together.”

Rasmussen explained that he would like to see two separate but jointly-staffed missile defense system centers, one Russian - one NATO, that cooperate in fighting threats, exchange key data, work together to analyze and assess new threats, and hold exercises.

Russia and NATO initially agreed to cooperate on the so-called European missile defense system at the Lisbon summit in November 2010.

However, further talks between Moscow and the alliance have foundered over NATO’s refusal to commit to a joint system and to grant Russia legal guarantees that the NATO system would not be aimed against Russia’s strategic nuclear deterrent.

The alliance has vowed to continue developing and deploying its missile defenses, regardless of the status of missile defense cooperation with Russia.

The United States announced earlier in March that plans to install the fourth and final phase of its missile interception system in Poland have been abandoned in favor of installing 14 new ground-based interceptors in Alaska.

Moscow welcomed the move but said it was not enough to alleviate Russia’s concerns.

Russia and the United States have recently agreed to resume regular consultations on missile defense at a deputy ministerial level and address the issue at a security conference in Moscow due to take place on May 23-24.

Revises and corrects the original story throughout. 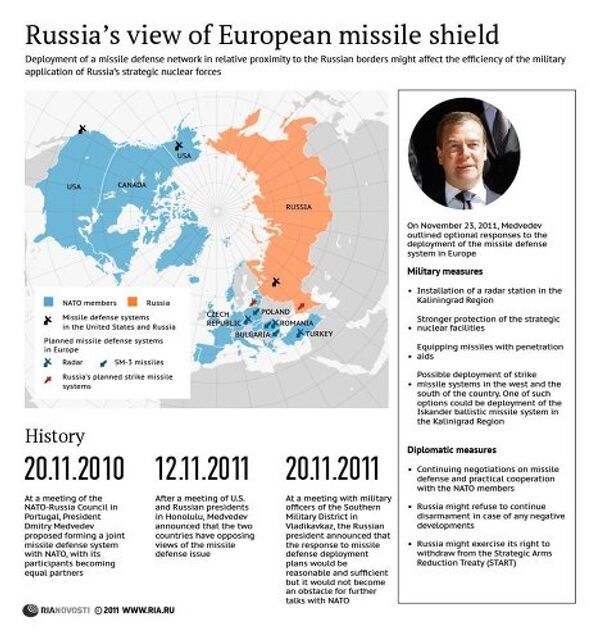