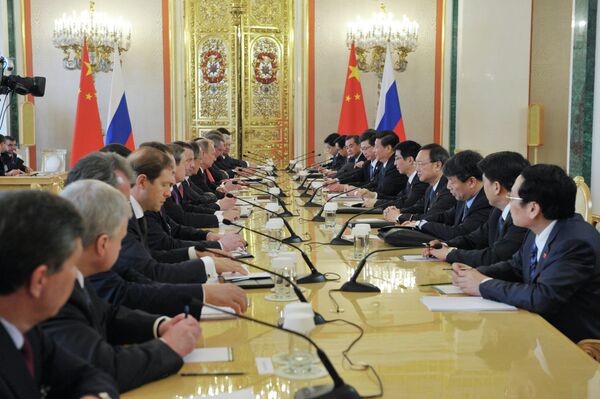 Russia inched closer on Friday to completing a 30-year agreement to supply energy-hungry China with natural gas after a meeting in Moscow between the two nations’ leaders.

MOSCOW, March 22 (RIA Novosti) – Russia inched closer on Friday to completing a 30-year agreement to supply energy-hungry China with natural gas after a meeting in Moscow between the two nations’ leaders.

President Vladimir Putin and Chinese premier Xi Jinping oversaw the signing of a tentative agreement between Gazprom and China National Petroleum Corporation to cooperate in the annual supply of up to 30 billion cubic meters of gas to China.

Completion of a gas deal has long been delayed over disagreements on the price.

Export volumes are expected to eventually rise to 60 billion cubic meters per year.

“The term of this contract … is 30 years, with the beginning of supplies due in 2018,” Gazprom chief executive Alexei Miller said.

Finalization of the deal is expected at the end of the year.

“In accordance with the memorandum signed, the sides have agreed that the priority direction of gas supplies from Russia to China is the 'eastern' route of the Power of Siberia gas pipeline,” Miller said.

The first section of the Power of Siberia pipeline is due to come onstream in late 2017, according to Gazprom’s website.

CNPC also signed an agreement with state-owned Rosneft, the world's largest listed oil producer, about the basic terms of prepaid crude oil supplies to China. The deal is yet to be finalized.

Rosneft chief executive Igor Sechin said the deal envisages a $2 billion loan from the China Development Bank for Rosneft in return for 25 years of oil deliveries.

“The agreement on principle of crude oil supplies to China envisages a gradual increase in those deliveries. This year, it will be 800,000 [metric] tons [of crude oil] in addition to contracts and obligations that were signed in 2009,” Sechin said.

Russia and China have also signed a cooperation agreement to build a refinery in China and engage in oil prospecting and extraction.