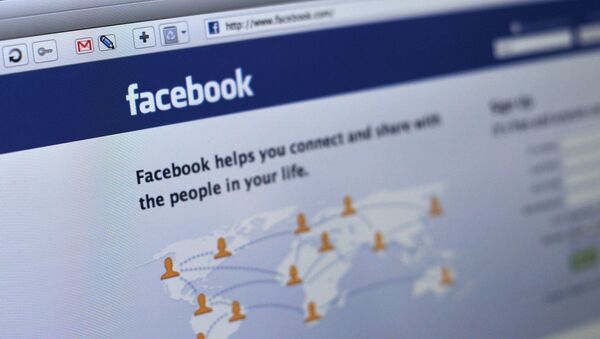 A video showing the sexual abuse of a child went viral on Facebook and was removed by the social networking site Friday after the disturbing footage sparked a wave of fury among Internet users.

WASHINGTON, March 22 (By Carl Schreck for RIA Novosti) – A video showing the sexual abuse of a child went viral on Facebook and was removed by the social networking site Friday after the disturbing footage sparked a wave of fury among Internet users.

The video appeared to have been posted on Facebook on Thursday, according to a flurry of posts by Twitter users expressing shock and disgust at the abuse of a young girl by a grown man reportedly depicted in the footage.

The clip had been shared more than 16,000 times in less than seven hours after it was posted on Facebook as of around 9 p.m. EDT Thursday (0100 GMT Friday), a Twitter user with the handle @SimplyHarmonyxo posted on her timeline.

The website Buzzfeed, which posted a chronicle of the Twitter reports about the video, reported Friday that users also began disseminating a screenshot from the video in order to warn other social media users about the images of child sexual abuse.

A Facebook spokesman told RIA Novosti that the social networking site removed the video Friday after the company was alerted to it by users.

“Nothing is more important to Facebook than the safety of the people that use our site and this material has absolutely no place on Facebook,” the company said in a statement Friday. “We have zero tolerance for child pornography being uploaded onto Facebook and we are extremely aggressive in preventing and removing child exploitive content.”

Details about the video and its origins remained sparse Friday.

An official with the Dallas, Texas, police department was quoted by the Dallas Morning News’ website Friday as saying that investigators there had learned that the video may have originated from Dallas’ Oak Cliff neighborhood.

Dallas police spokesman DeMarquis Black confirmed to RIA Novosti Friday that the department’s child exploitation unit had opened a probe into the Facebook video but said he could not provide further details because the investigation was in its early stages.

“Posting a link to that sort of material or emailing someone a link—that would be distribution or publication, and you would face the potential penalties of both federal criminal sanctions, as well as local state sanctions,” Cappetta said.

The United States has mandatory minimum penalties for certain crimes related to child pornography that include prison terms ranging from 5 to 15 years. Federal penalties for such crimes can include a prison sentence of up to 40 years.

Cappetta said, however, that US federal and state authorities are unlikely to pursue prosecution of individuals who merely reposted the Facebook video without comment or reposted it in order to alert the social networking site to the clip.