US Pediatricians Back Same-Sex Marriage 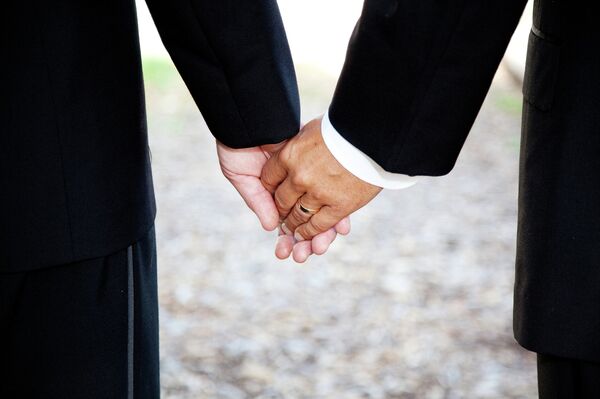 © Fotolia / Lisa F. Young
Subscribe
International
India
Africa
The American Academy of Pediatrics (AAP), one of the largest and most influential pediatrician groups in the United States, announced Thursday that it supports same-sex marriage, saying child health and well-being depends on a stable relationship between parents and not on the parents’ sexual orientation.

WASHINGTON, March 21 (RIA Novosti) - The American Academy of Pediatrics (AAP), one of the largest and most influential pediatrician groups in the United States, announced Thursday that it supports same-sex marriage, saying child health and well-being depends on a stable relationship between parents and not on the parents’ sexual orientation.

“Children thrive in families that are stable and that provide permanent security, and the way we do that is through marriage,” said Dr. Benjamin Siegel, chair of the AAP Committee on Psychosocial Aspects of Child and Family Health, and a co-author of the AAP’s new policy statement, said in an announcement.

“The AAP believes there should be equal opportunity for every couple to access the economic stability and federal supports provided to married couples to raise children,” Siegel said.

The AAP, which claims to represent 60,000 US pediatric physicians and specialists, said in a technical report published online that it came to its conclusions about same-sex marriage based on “extensive data” collected over 30 years focusing on the welfare of children in such family arrangements.

The announcement comes less than a week before the US Supreme Court is due to consider two cases that will determine whether the federal Defense of Marriage Act (DOMA) and California’s Proposition 8 – two landmark pieces of legislation, each of which defines “marriage” as the union between one man and one woman – are constitutional.

In the report, the AAP said it supports the repeal of DOMA, “and similar public policies that limit access to federal benefits associated with civil marriage for gay and lesbian couples, and the right of gay and lesbian adults to adopt and provide foster care for eligible children.”

The AAP said it came to its decision after reviewing more than 30 years of research that studied the psychological and sexual health of children raised by gay and lesbian parents.

“If a child has two loving and capable parents who choose to create a permanent bond, it’s in the best interest of their children that legal institutions allow them to do so,” said Dr. Ellen Perrin, co-author of the policy statement.

“The AAP has long been an advocate for all children, and this updated policy reflects a natural progression in the Academy’s support for families.”

Nearly two million children are being raised by gay and lesbian parents in the United States today, the AAP reported. At present, nine US states and the District of Columbia allow same-sex couples to marry legally and other states are debating similar legislation.