Government Swoops in on Russian NGOs for Checks 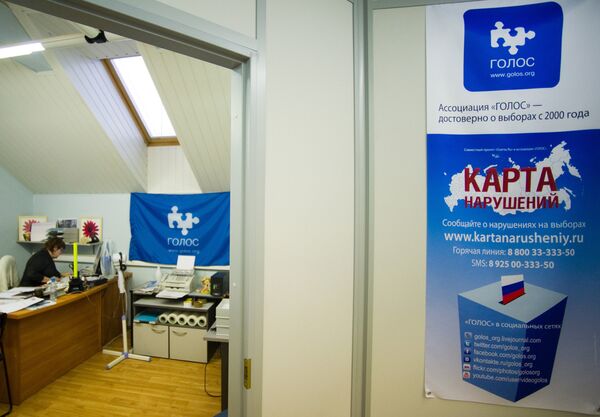 © RIA Novosti . Alexander Vilf
/
Go to the mediabank
Subscribe
International
India
Africa
Several state agencies descended on the offices of one Russia’s most respected rights groups on Thursday as part of an inspection campaign that activists believe is aimed at harassing non-governmental organizations.

MOSCOW, March 21 (RIA Novosti) – Several state agencies descended on the offices of one Russia’s most respected rights groups on Thursday as part of an inspection campaign that activists believe is aimed at harassing non-governmental organizations.

Non-governmental groups have been coming under growing pressure since the introduction last July of the “foreign agents” law, which has tightened restrictions and increased bureaucratic procedures for organizations receiving foreign donations.

According to media reports, checks on Russian non-governmental group began in late February.

Pavel Chikov, head of the prominent Agora rights group, says up to 5,000 organizations could be targeted.

Kommersant daily cited Yelena Topoleva-Soldunova, a member of the Kremlin’s human rights council, as saying the scale of the checks was “unprecedented.”

Officials with the Prosecutors General’s Office have described the campaign as “routine checks,” but the presence of state-friendly media at Thursday’s inspection indicates some organizations could fall victim to smear campaigns.

“A most disgusting NTV guy is chasing everyone around the office, filming and asking, ‘are you receiving any financial help from abroad?’” Anna Karetnikova, another spokeswoman for Memorial, wrote on Twitter on Thursday.

Memorial said the NTV crew only left the building after the police were summoned.

None of the government agencies involved in Thursday’s check was available for comment.

Representatives of some non-governmental organizations that have already undergone inspections have reportedly been shocked by the intensity and occasional bizarreness of the process.

In the Rostov region, prosecutors demanded to see the X-ray records of employees of one local organization, according to the Moskovsky Komsomolets daily.

Clergy at a Roman Catholic church in the southern city of Novocherkassk were reportedly questioned about whether they promote extremism in their sermons, including through the display of Nazi insignia.

Some analysts see a link between pressure being applied on non-governmental group and the wave of anti-government protests that began in the wake of much-criticized parliamentary elections in December 2011. Some organizations, including Memorial, were heavily involved in those rallies.

Non-governmental groups could play a role in channelling that restless into organized protests, Salin said.