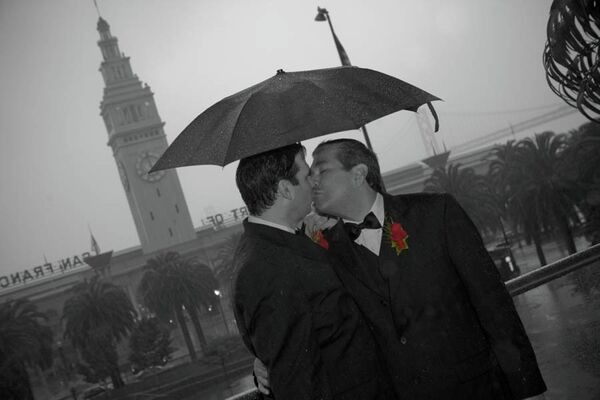 © Nick Lostracco/Lostracco Photography
Subscribe
From wedding venues and flowers to dresses, receptions and honeymoon suites, same-sex marriage has given rise to a thriving new cottage industry that caters to gay and lesbian couples in the United States and businesses say they’re having a hard time keeping up.

WASHINGTON, March 20 (By Maria Young for RIA Novosti) - From wedding venues and flowers to dresses, receptions and honeymoon suites, same-sex marriage has given rise to a thriving new cottage industry that caters to gay and lesbian couples in the United States and businesses say they’re having a hard time keeping up.

“I have probably 60 wedding officiants in New York and every one of them is booked pretty solid for the year now, and to be honest, we have vendors in 40 states and a number of foreign countries, and we are in dire need of employees,” said Michael Jamrock, co-owner of EnGAYged Weddings, a wedding website for gay couples, in an interview with RIA Novosti.

He launched the site in 2009, when “commitment ceremonies” were becoming popular with same-sex couples in Florida. Today, gay marriage is legal in nine states and the District of Columbia, and Jamrock said his website traffic has grown from 30,000 unique visitors per month in 2009 to an average of 250,000 per month now.

Emily Lester, who owns EM Event Management, a New York wedding planning firm, said gay weddings made up 30 percent of her business last year, and she’s already had couples contacting her for ceremonies in 2014.

“The calls started coming in as soon as New York passed the law in 2011, and I had to hire assistants to help,” she told RIA Novosti.

“I have to reword contracts, I can’t say ‘the bride and groom,’ I have to say ‘the couple,’ and sometimes I have to deal with two wedding dresses instead of one, so that’s a big deal,” she added.

A Washington Post-ABC News poll this week found support for same-sex marriage in the United States has jumped in the last decade from 37 percent in 2003 to 58 percent now.

An annual survey released this week by TheKnot.com, an online wedding magazine, included same-sex couples for the first time, a decision the company said was based on “more same-sex marriages throughout the country,” said Anja Winikka, TheKnot.com site director.

The company surveyed more than 17,500 newlyweds, straight and gay, and found the average cost for a wedding in the United States in 2012 was $28,427. Same-sex couples tend to be slightly older than the national average, and tend to spend slightly more on their weddings, Winikka said.

The company would not release the average cost for same-sex weddings.

“Gay and lesbian couples have a smaller number of venues to choose from, they probably get turned down by half of the vendors out there, so less competition for the price,” he said.

“And for some gay couples, they never dreamed this day would come, never thought a wedding would even be possible, so there’s more of a tendency to want to have that dream wedding,” he added.

The biggest challenge can be finding an officiant willing to perform a religious ceremony.

“I have had situations where ministers won’t perform the marriages. They might really like the couple but will say I just can’t,” said Lester.

“We tend to look overall for non-religious venues, maybe a Hawaiian wedding on the beach, because the fact is, many gay couples may be religious, or spiritual, but many of them also feel burdened by religious institutions,” said Coatsworth.

Those who cater to same-sex couples planning a wedding also said it was critical to have “the talk” with vendors.

“I’ll explain to the owner, I understand you’re a gay-friendly company, but you better make sure your employees are gay friendly, so let your staff know if anybody has a problem with it they better reschedule, and the same for a limo company, you better send a gay friendly driver,” said Jamrock.