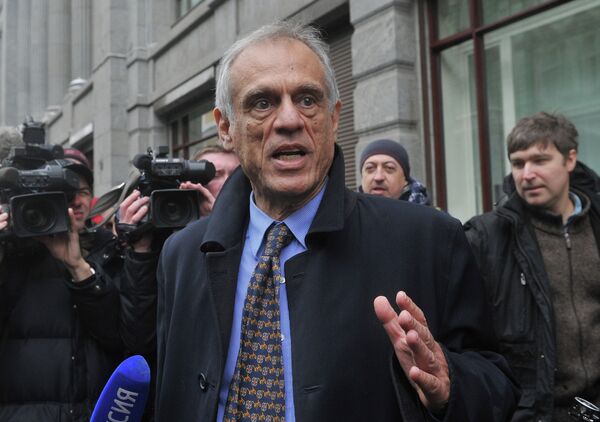 The Cypriot minister is in Moscow to discuss the extension of a 2.5-billion-euro loan that Russia gave Nicosia in 2011 at a rate of 4.5 percent.

“We had a very good and constructive meeting and very fair talks. We understand that the situation is difficult. We will continue negotiations to find a decision that will allow us to get Russia’s support,” Sarris told journalists after talks with Russian Finance Minister Anton Siluyanov.

“We will be here until we reach an agreement,” said Sarris, who arrived late Tuesday.

The Prime news agency quoted a source close to the negotiations as saying the talks with Shuvalov have produced no “concrete results” and will continue through Wednesday and Thursday.

The Wall Street Journal reported Wednesday that Sarris is expected to offer a deal that includes imposing a 20 percent or 30 percent levy on Russian-held deposits in Cypriot banks. In return, Russia would be given equity in Cyprus's future national gas company and control of the board of directors at Cypriot banks, the newspaper said, citing "a government official," presumably Cypriot. Other versions of potential proposals have also begun circulating in the press.

While Sarris, who no longer enjoys the support of the Cypriot president for his handling of the crisis, was en route to Moscow, media reports said he is about to be replaced upon his return from the trip. Sarris has dismissed the reports.

A source in the Cypriot embassy in Moscow told RIA Novosti on Wednesday that Cypriot President Nicos Anastasiades has received an invitation to visit Russia to discuss the current crisis, but the date has yet to be set.

Parliament in Cyprus on Tuesday rejected a government bill that envisioned a levy of 6.75 percent on deposits of less than 100,000 euros ($128,950) and 9.9 percent on larger deposits aimed at securing a European Union bailout loan.

Putin also reiterated his concerns about “any measures that could harm the interests of Russian businesses or individuals [in Cyprus].”

Russian individuals and businesses had stood to lose around $2 billion if the levy proposal had gone through.

But if the island nation defaults on its obligations, Russian depositors risk losing over $50 billion, considering loans granted by Russian banks to Cyprus-registered companies, according to Moody's.

Meanwhile, Eurogroup chairman Jeroen Dijsselbloem said on Tuesday that the European bailout proposal was still on the discussion table, but the Cypriots would have to find a way to raise about 6 billion euros to unlock a 10-billion-euro package from the EU and IMF.