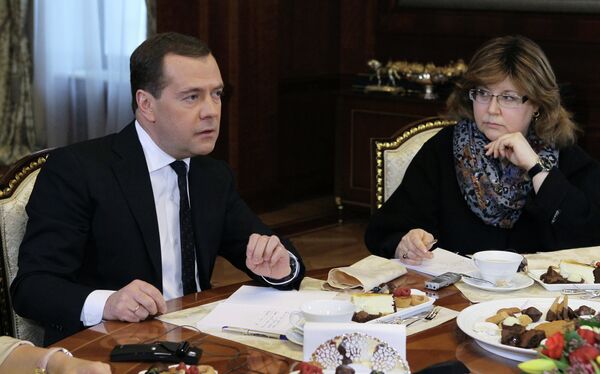 Russian Prime Minister Dmitry Medvedev on Wednesday slammed the European Union and Cyprus for what he described as their dismal management of the island nation’s debt woes.

GORKI (Moscow Region), March 20 (RIA Novosti) – Russian Prime Minister Dmitry Medvedev on Wednesday slammed the European Union and Cyprus for what he described as their dismal management of the island nation’s debt woes.

Medvedev told journalists from European media outlets in an interview that the mishandling of the crisis had undermined confidence in financial institutions, in Cyprus and beyond.

“The actions of the EU, the European Commission and the Cypriot government to settle the debt problem unfortunately only resemble the actions of a bull in a china shop,” Medvedev said.

Anxiety spread across Europe on Tuesday after the Cypriot parliament overwhelming rejected a windfall levy on bank accounts that international creditors, including the EU and the International Monetary Fund, had set as a condition for providing a 10 billion euro ($13 billion) bailout.

Developments in Cyprus are being closely monitored by Russia, which stands to suffer considerably from the fallout of the worsening debt impasse.

Russian lenders are heavily exposed to Cyprus risk as they had an estimated $12 billion on deposit with banks on the island at the end of last year, with Russian corporate deposits accounting for another $19 billion, according to Moody’s international rating agency.

Russian individuals and businesses had stood to lose around $2 billion if the levy proposal had gone through. But if the island nation defaults on its obligations, Russian depositors risk losing over $50 billion, considering the loans granted by Russian banks to Cyprus-registered companies, Moody's estimates.

“We have many open public structures operating through Cyprus, and their money has been blocked for unknown reasons,” Medvedev said. “That is why we have to take such a firm stance.”

Medvedev also floated a move that would spell an end to Cyprus’ status as a haven for monied Russians by suggesting Moscow could cancel the double-taxation treaty between the two nations.

“I do not know whether we need such a treaty in this case,” Medvedev said. “The issue of terminating that treaty may arise.”

He described the situation in Cyprus as “very complicated” and said the capital will flow out of the country’s economy regardless of decisions made by the Cypriot government.

“It is quite evident that no matter what they decide - whether to partially levy the deposits, which in my opinion looks like robbery, or not - the capital will flow out of Cyprus, leaving its banking system weakened. If this is what the EU decision is aimed at, then it is a very strange decision,” Medvedev said.

He said the majority of Russian individuals and businesses had put their money in Cypriot banks legitimately and the proportion of accounts that might involve shadow schemes of capital flight out of Russia was “not as significant as it is supposed.”

Cypriot Finance Minister Michael Sarris traveled to Moscow on Wednesday to discuss the extension of a 2.5-billion-euro loan from Russia in 2011 issued at a rate of 4.5 percent.

Meanwhile, Jeroen Dijsselbloem, chairman of the Eurogroup of EU finance ministers, says the European bailout is still on table, but that Cyprus would have to find a way of raising 6 billion euros ($7.8 billion) to unlock the package.