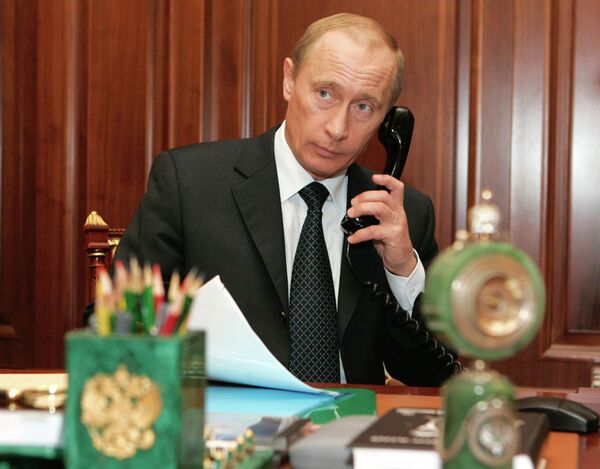 “During a telephone conversation, the heads of state analyzed the economic situation in Cyprus in light of the Eurogroup’s bailout proposals,” Peskov said late on Tuesday, adding that the talks were initiated by the Cypriot president who informed Putin about the parliament’s decision.

Parliament in Cyprus on Tuesday rejected a government bill that envisioned a levy of 6.75 percent on deposits of less than 100,000 euros ($128,950) and 9.9 percent on larger deposits aimed at securing a European Union bailout loan.

Putin reiterated his concern about “any measures that could harm the interests of Russian businesses or individuals [in Cyprus].”

"Putin reaffirmed Russia's position on the settlement of the Cyprus crisis," Peskov said.

The Russian president said on Monday that the decision to impose a one-off levy on all bank deposits in Cyprus, if made, “would be unfair, unprofessional and dangerous.”

Cypriot Finance Minister Michalis Sarris and some other Cypriot high-ranking officials are expected to visit Moscow on Wednesday to discuss the extension of a 2.5-billion-euro loan that Moscow extended to Nicosia in 2011 at a rate of 4.5 percent.

Meanwhile, Eurogroup chairman Jeroen Dijsselbloem said on Tuesday that the European bailout proposal was still on the discussion table but the Cypriots would have to find a way to raise about 6 billion euros to unlock a 10-billion-euro package from the EU and IMF.