Iranian Atheists: Waiting to Come Out 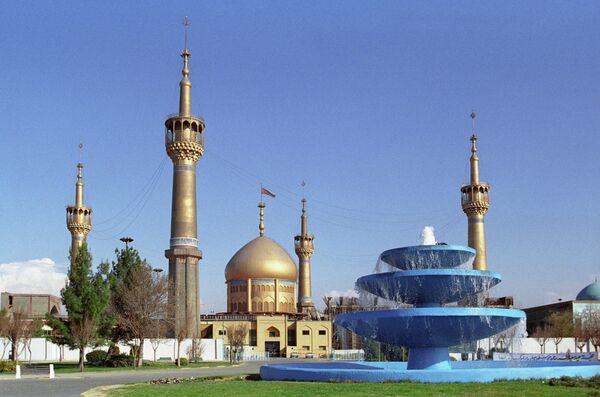 Asked about atheism in Iran, a group of women at the Mausoleum of Ayatollah Khomeini in Tehran said they were unfamiliar with the concept.

TEHRAN/MOSCOW, March 19 (Alexey Eremenko, RIA Novosti) – Asked about atheism in Iran, a group of women at the Mausoleum of Ayatollah Khomeini in Tehran said they were unfamiliar with the concept.

“Maybe there are people like that abroad,” an amiable elderly lady in a black headscarf eventually said in a puzzled tone. “We wouldn’t know.”

There is no faulting her, given that atheists and agnostics do not exist in Iran – officially. A 2011 nationwide census put the share of Muslims in the country at 99.4 percent, with Christians, Jews and Zoroastrians making up another 0.2 percent, and the rest – about 300,000 people – falling under the “other” and “unknown” categories.

Yet there have been some doubts about the reliability of these statistics, and there certainly appear to be Iranians who question God’s existence – though they do not speak about it openly: A public coming-out to embrace Christopher Hitchens and his ilk could land them on death row.

“There are quite a lot of [Iranian] atheists, including myself to some extent,” said Milad, an Iran-born IT professional now living in London.

Like all people interviewed for this article who acknowledged the existence of non-believers in Iran, he asked to have his name changed, fearing persecution.

Milad is right to be cautious, despite residing abroad, because the government is not above cracking down on dissenters’ relatives, said Cyrus, also an Iran native, who works in the US media industry.

Cyrus said he knows of at least one case where police arrested the Iran-based father of an émigré who ran a pro-atheism group on Facebook, releasing him only after the group was shut down. He gave no details.

But arrest can amount to getting off easy, given that punishment for apostasy in Sharia law – the prescribed guidelines for Iranian judges – is death for male apostates and life imprisonment for females.

One problem is that Iranians must spell out their religious affiliation in numerous official documents, such as college applications, relatively early in life. For the majority, that means formally identifying themselves as Muslim. And once that’s done, there is no turning back to embrace any other belief system.

No executions of atheists have been reported from Iran in recent years. But apostasy is often cited among regime opponents’ crimes, lending extra weight to the accusations against them. In a high-profile case in 2002, university professor Hashem Aghajari was convicted of apostasy just for criticizing Iran’s theocracy and given a death sentence, later replaced by three years’ imprisonment.

“If you try to lie or do not say anything about your beliefs, no one will do anything to you,” the administrator of the Iranian Atheists and Humanists group on Facebook (not the one that was shut down) wrote to RIA Novosti in response to questions last month.

None of the self-proclaimed Iranian atheists reached by RIA Novosti agreed to in-person interviews. “This would make me a very dead Iranian girl,” one of them quipped.

“[But he] who dares, wins, so we’re acting anonymously,” added the administrator of the Facebook group, who would not even give his/her gender.

There are several Iranian pro-atheism communities on Facebook, run in either English or Persian and mostly focused on aggregating pictures poking fun at religious figures (not limited to Islam – the recently resigned pope, for example, also gets skewered). The groups have anywhere between 2,000 and 40,000 likes each, though many supporters seem to be foreigners.

This form of protest may seem toothless by Western standards, but it amounts to something more daring in the Iranian context. While the apostasy punishments are by far the scariest stick in the government’s arsenal, there are more mundane reminders of the risks for Internet activists: Facebook itself is blocked in the country, and local authorities do not take kindly to irony, having even banned toys based on “Simpsons” characters as “Western propaganda.”

Take Off That Scarf

Online dissent may be just the tip of the iceberg, the nameless Facebook administrator said.

“We are not alone. The population of people who are atheist is growing,” s/he said, adding that there are many atheists and agnostics in Iran among well-educated residents of big cities.

These middle-class urbanites were the driving force behind the 2009-2010 opposition protests in Tehran that, at their peak, brought three million people to the streets of the 12-million-strong city, according to Time magazine’s estimates.

The protests – brutally suppressed by the authorities – were aimed against alleged election fraud believed to have robbed a reformist candidate of victory, and were the biggest civil unrest in Iran since the Islamic revolution of 1979.

The protests had no outright religious agenda, but they called for more freedom – including personal freedom. In a telling gesture, female protesters removed their headscarves when camping out in Tehran’s city squares – a move that, under normal circumstances, would have likely led to immediate arrest for defying the country’s strict Islamic moral code.

Though no reliable studies exist, explicit atheism appears to remain a rarity in Iran, said all the Iranians and Iran experts interviewed for this article (those who admitted familiarity with the concept, that is).

“I have heard some friends say that they are atheists or agnostics, but not admit it publicly,” said Lana Ravandi-Fadai, a researcher at the Iran sector of the Moscow-based Institute of Oriental Studies of the Russian Academy of Sciences.

US-based Cyrus shared similar observations, saying those who admitted atheistic views even in their own social circle could face a judgmental response.

But religious practices have been shifting, with more people giving up active worship while still embracing Islam as part of their cultural identity, several émigrés and Iran-based atheists said.

“Many have never even set foot in a mosque despite identifying themselves as Muslims,” according to London-based Milad, who said he still keeps in close contact with relatives and friends in Iran.

“In my personal view, the local mosque often serves social and even psychotherapeutic functions in addition to its spiritual significance,” said Ravandi-Fadai. “I know many women, for instance, who spend their days at the mosque in order to socialize and talk over problems with others.”

But politicians for whom Islam is dogma stir up more public ire than the little-discussed atheists, Cyrus pointed out, and others agreed.

“Some claim there are fewer true believers in Iran now than before the Islamic revolution,” said Ali, an Iran native living in Moscow. “People are put off by being forced to believe.”

It seems, judging by a smattering of conversations at least, that ordinary Iranians’ identity-over-ideology approach to Islam leads to a spirit of live and let live when it comes not only to other religions but even to the lack of any religion at all. None of the half-dozen religious Iranians interviewed by RIA Novosti, including two Tehrani clerics (unfamiliar, they said, with the concept of atheism), expressed any hostility toward non-believers.

“I have never met such people, but I would just want to speak with them and understand them,” said Reza, a 30-year-old taxi driver from the southern city of Bushehr.

“I’m really interested in them. And I’m not thinking I’m better than them just because of my religion,” he said during a visit to the Khomeini mausoleum with his wife and toddler son.

Reza had come to the shrine to “enjoy the calm and peace” (an effect to which his child seemed immune). The family later strolled along the enfilade of stores that ring the tomb of Iran's great religious leader offering snacks, carpets, Parker pens, and other items as appealing to the religious as to atheists, if any happened to pass by.