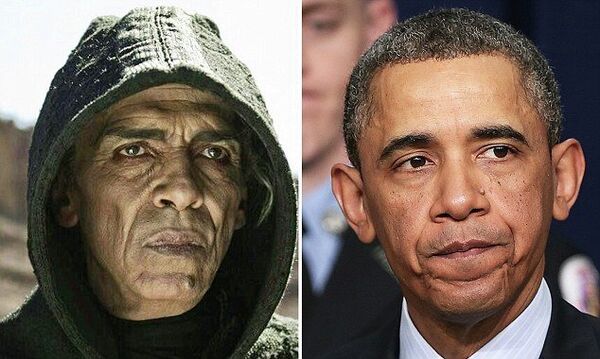 WASHINGTON, March 18 (RIA Novosti) – Cable television’s History Channel miniseries “The Bible” has created a social media firestorm in the United States after viewers of Sunday night’s episode took to Facebook and Twitter noticing an uncanny resemblance between the character Satan and US President Barack Obama.

Conservative television host Glenn Beck tweeted his observations in a post that was shared hundreds of times across the micro-blogging site.

Anyone else think the Devil in #TheBible Sunday on HIstory Channel looks exactly like That Guy? twitter.com/glennbeck/stat…

The character Satan is played by Moroccan actor Mehdi Ouazanni. And while some believed the similarity was a mere coincidence, others began to speculate the move was intentional.

@markburnetttv Why do you see Jesus as caucasion and the "devil" as black? Do some research, you moron. #TheBible #p2 #bigotry #racism

Helping to fuel the argument that Ouazanni was intentionally made up to look like the US president are online photos that surfaced of the actor without the makeup used to create his devilish onscreen look.

Since its initial debut on March 3, “The Bible” has drawn surprisingly strong ratings and dominated social media, trending as the top Twitter topic throughout most of its two-hour premiere.

“This is utter nonsense,” the show’s Executive Producer Mark Burnett – a former Obama campaign donor— said in a statement. "The actor who played Satan, Mehdi Ouzanni, is a highly acclaimed Moroccan actor. He has previously played parts in several Biblical epics -- including Satanic characters long before Barack Obama was elected as our President.”

“History Channel has the highest respect for President Obama," said the cable television network in a statement. "The series was produced with an international and diverse cast of respected actors. It's unfortunate that anyone made this false connection. History's 'The Bible' is meant to enlighten people on its rich stories and deep history."