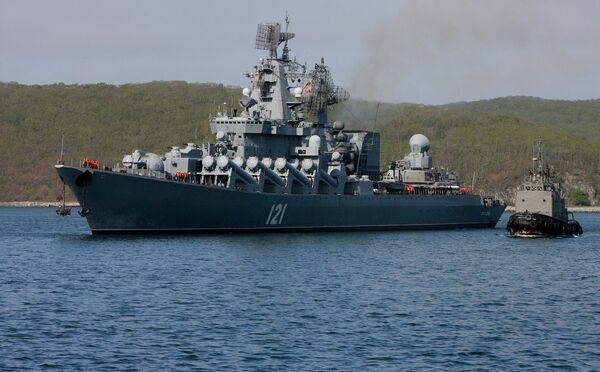 © RIA Novosti . Vitali Ankov
/
Go to the photo bank
Subscribe
The Russian Navy will maintain 5-6 warships in the Mediterranean Sea as a task force to defend Russia’s interests in the area, Navy Commander Adm. Viktor Chirkov said on Sunday.

MOSCOW, March 17 (RIA Novosti) – The Russian Navy will maintain 5-6 warships in the Mediterranean Sea as a task force to defend Russia’s interests in the area, Navy Commander Adm. Viktor Chirkov said on Sunday.

"Up to five-six warships must be present in the Mediterranean Sea on a permanent basis and control must be exercised through the command of the [Russian] Black Sea Fleet,” Chirkov said in an interview with the Zvezda TV network run by the Defense Ministry.

The Russian Navy’s Mediterranean task force will comprise frigates and cruisers, as well as support vessels, he said.

Russian Defense Minister Sergei Shoigu said on Monday a decision to deploy a permanent naval task force in the Mediterranean had been made.

“I believe that we have the capability to form and maintain such a task force,” Shoigu said, citing the success of recent large-scale naval drills carried out by the Russian navy in the Mediterranean and Black seas.

Shoigu did not mention, however, a timeline for the deployment of the new task force, which would likely require significant effort to ensure efficient logistics and the proper maintenance of warships in the Mediterranean group.

000000
Newsfeed
0
New firstOld first
loader
LIVE
Заголовок открываемого материала
Access to the chat has been blocked for violating the rules . You will be able to participate again through:∞. If you do not agree with the blocking, please use the feedback form
The discussion is closed. You can participate in the discussion within 24 hours after the publication of the article.
To participate in the discussion
log in or register
loader
Chats
Заголовок открываемого материала
Worldwide
InternationalEnglishEnglishMundoEspañolSpanish
Europe
DeutschlandDeutschGermanFranceFrançaisFrenchΕλλάδαΕλληνικάGreekItaliaItalianoItalianČeská republikaČeštinaCzechPolskaPolskiPolishСрбиjаСрпскиSerbianLatvijaLatviešuLatvianLietuvaLietuviųLithuanianMoldovaMoldoveneascăMoldavianБеларусьБеларускiBelarusian
Transcaucasia
ԱրմենիաՀայերենArmenianАҧсныАҧсышәалаAbkhazХуссар ИрыстонИронауОssetianსაქართველოქართულიGeorgianAzərbaycanАzərbaycancaAzerbaijani
Middle East
Sputnik عربيArabicArabicTürkiyeTürkçeTurkishSputnik ایرانPersianPersianSputnik افغانستانDariDari
Central Asia
ҚазақстанҚазақ тіліKazakhКыргызстанКыргызчаKyrgyzOʻzbekistonЎзбекчаUzbekТоҷикистонТоҷикӣTajik
East & Southeast Asia
Việt NamTiếng ViệtVietnamese日本日本語Japanese俄罗斯卫星通讯社中文（简体）Chinese (simplified)俄罗斯卫星通讯社中文（繁体）Chinese (traditional)
South America
BrasilPortuguêsPortuguese
NewsfeedBreaking
13:11 GMTWomen to Dominate Iceland's Parliament for First Time Ever, Reports Suggest
13:09 GMTBlast Kills Taliban Intelligence Officer in Eastern Afghanistan, Source Says
13:00 GMTGermans Head to Polls to Choose New Bundestag
12:51 GMTDozens of New Yorkers Stage Anti-Vaccine Protest at a Food Court Chanting F**k Joe Biden
12:41 GMTFour Inmates Dead, One Injured in Attempted Jailbreak in Philippines, Reports Suggest
12:40 GMTVirginia Giuffre to Reportedly Hand Prince Andrew Secret Doc Able to Defeat Her Lawsuit
12:37 GMTRussia Scrambles Three Su-35 Jets to Escort US B-52 Bomber Approaching Border in Pacific Ocean
12:32 GMTCyclone Gulab Likely to Make Landfall in India on Sunday Evening
12:21 GMTUN Chief Warns 'Humanity Unacceptably Close to Nuclear Annihilation'
12:09 GMTKremlin Says It Hopes for Consistency on Minsk Agreements From Germany After Merkel Leaves
12:02 GMTRussian Presidential Spokesman Says Gazprom Fulfilling All Obligations
11:54 GMTLabour Leader Says It's 'Not Right' to Say Only Women Have a Cervix
11:43 GMT'F**k Them': Carlson Responds to Yet Another Call to Fire Him Over 'Great Replacement' Theory
11:42 GMT'Piece of Scum': UK Labour Deputy Leader Lashes Out at Tories
11:14 GMTUK Transport Minister Calls on Britons to Behave Normally, Says There is No Shortage of Fuel
11:12 GMTHamas Has No Place in Sudan But Will It Give Up on Former 'Base'?
11:05 GMTJapan Should Look Into Having Nuclear Submarines, Candidate for Ruling Party Head Says
11:05 GMTIsraeli Soldiers Shoot Down Nazi Flag Raised Near Outpost in West Bank - Photo, Video
10:52 GMTTaiwan Strait Situation 'Complex and Grim', Xi Jinping Says as He Calls for 'National Reunification'
10:46 GMTHillary Clinton Urges to Call Her 'Madam Chancellor', But Netizens Come Up With Other Names