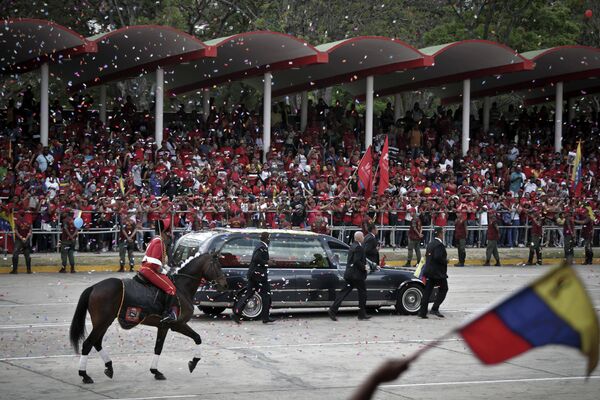 housands of Venezuelans lined up on Saturday outside the Military Museum in Caracas, where the body of late President Hugo Chavez had been brought and placed into a marble sarcophagus.

MEXICO CITY, March 16 (RIA Novosti) – Thousands of Venezuelans lined up on Saturday outside the Military Museum in Caracas, where the body of late President Hugo Chavez had been brought and placed into a marble sarcophagus.

Access to the sarcophagus was opened on Saturday for those wanting to pay tribute to the Venezuelan leader, who died on March 5 at the age of 58 after a two-year-long fight with cancer.

In a culmination of ten days of national mourning, crowds escorted on Friday a black hearse carrying a casket with Chavez’s body on a 12-km trip to the Military Museum from the Military Academy, where it had lain in state.

Chavez, who ruled Venezuela for 14 years, is now looking at the mourners from images hanging on the Military Museum’s walls but no photography is allowed inside. The museum’s staff will shoot a vintage gun daily at 4:25 p.m., the time of the comandante’s death.

The Venezuelan government earlier gave up its plans to preserve Chavez’s body for eternity but it is not clear what will happen to the body in the future.

“We have ruled out the idea of embalming the body of Comandante Chavez after a Russian medical commission report, although many Venezuelans had hoped for this option,” Communications Minister Ernesto Villegas wrote in his Twitter blog on Friday.

According to the minister, the Russian experts said Chavez’s body would have to be sent to Russia for seven to eight months to be properly embalmed.

Maduro, who was vice president under Chavez, will run as the candidate from the ruling party, as Venezuelans will vote in snap presidential elections on April 14. Miranda state governor Henrique Capriles, who was defeated by Chavez in the October vote, will be the opposition’s candidate. Maduro is likely to win the vote, according to opinion polls.