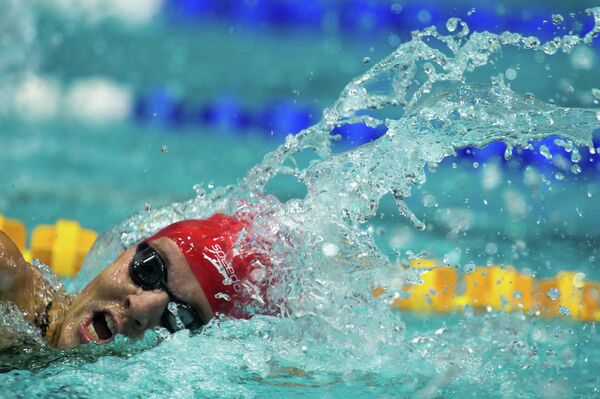 A swimmer from the London 2012 Olympics has received a 2.5 year ban for breaking anti-doping rules, the Russian Anti-Doping Agency said Saturday.

Natalya Lovtsova competed in the Russian 4x100-meter freestyle relay team, which lost in the heats.

“The Russian Swimming Federation ... has taken the decision to take sanctions against the athlete Natalya Lovtsova in the form of a 2.5 year disqualification,” RUSADA said in a website statement.

The exact nature of the offense was not specified; the statement said only that she had committed a "violation of anti-doping rules."

Lovtsova had been under a temporary suspension since November 30, shortly after the Russian championships, and RUSADA said that would be the start date of her ban.

It comes days after two other Russian swimmers from the London Olympics, Ksenia Moskvina and Ekaterina Andreeva, were banned by RUSADA.

Moskvina, the 2009 European short-course 100 meters backstroke champion, will not be allowed to compete until November 2019 after receiving a six-year ban to run after an existing suspension for another offense. She did not compete at last year’s Olympics.

Andreeva completed at the London 2012 Olympics in the 200m individual medley without winning a medal.

RUSADA said she had been banned for 18 months for an unspecified doping offense and that her punishment was dated from November 30 of last year.

Track cyclist Victoria Baranova was expelled during the Games for having taken artificial testosterone.

The flurry of doping violations prompted the head of the All-Russian Athletics Federation to say last month that a major investigation could be launched.

Valentin Balakhnichev  cited as an example a recent wide-ranging probe by the Australian Crime Commission, which found evidence of doping in multiple sports.

Balakhnichev suggested he would like to see cycling-style biological passports brought in for all athletes. He said that around 3,600 doping tests were carried out in Russia every year, a sharp rise on previous years.