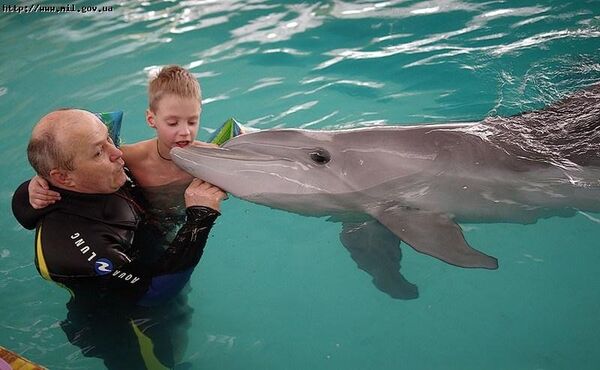 Ukraine’s Defense Ministry vehemently denied Thursday that “killer” dolphins had escaped from their trainers as reported earlier this week, saying that none of the marine mammals in its care have fled, none of them are used for military purposes and the whole story of their escape was a hoax.

MOSCOW, March 14 (Alexandra Odynova, RIA Novosti) – Ukraine’s Defense Ministry vehemently denied Thursday that “killer” dolphins had escaped from their trainers as reported earlier this week, saying that none of the marine mammals in its care have fled, none of them are used for military purposes and the whole story of their escape was a hoax.

“Yesterday our military officials saw with their own eyes that all the dolphins are present in the oceanarium,” a Defense Ministry spokesman told RIA Novosti by telephone from Kiev, adding that the six dolphins – and one Steller sea lion – do not serve military purposes.

Earlier this week, Ukrainian media circulated a scanned document – identified as an internal report from the head of a military research institute – informing naval command that three dolphins equipped with firearms had escaped from their handlers to the open seas during a training session late last month.

On Tuesday, the ministry dismissed the document, dated February 24, as a “fake” and a “provocation.”

The ministry has also issued a statement listing its arguments about the inauthenticity of the document, which was not on letterhead and had no ink stamp – a ubiquitous feature of post-Soviet officialdom.

In it, the oceanarium’s director, Anatoly Gorbachyov, whose name had been on the scan, said he had never written such a document and the signature was a bad forgery that “didn’t even try” to resemble his genuine John Hancock.

Also, the date on the scan was a Sunday, a non-working day when the dolphins had not left their pens, according to the statement.

Finally, the document reproduced by the press was addressed to a naval commander, while the research institute is not answerable to the navy.

“The mythical report was written up by a person who doesn’t even quite understand military issues,” Gorbachyov was quoted in the statement as saying.

The ministry spokesman said Thursday that the military is not planning to investigate the incident.

According to the official websites of Ukraine’s navy and the oceanarium, the training of dolphins for the Soviet navy in the port city of Sevastopol, where the facility is located, dates back to the 1960s. They were trained to find military equipment such as mines on the seabed, as well as to attack divers and to help develop "means for fighting at sea." In the 1980s, the aims of the training included anti-sabotage and rescue operations.

After the breakup of the Soviet Union and the divvying up of the Black Sea Fleet into Ukrainian and Russian fleets, the dolphin training section and its specialists went to the Ukrainian Armed Forces.

Now, instead of training for military operations, the oceanarium offers a range of therapies involving swimming with dolphins and treatments for children with special needs.

“There were repeatedly cases in the 1980s when control was lost over dolphins,” Plyachenko said. “If a male dolphin saw a female dolphin during the mating season, he would immediately set off after her and would no longer obey any commands. But in a week or so he’d come back.”

Only once, he said, in 1983, had a dolphin, named Titan, broken loose and never came back.