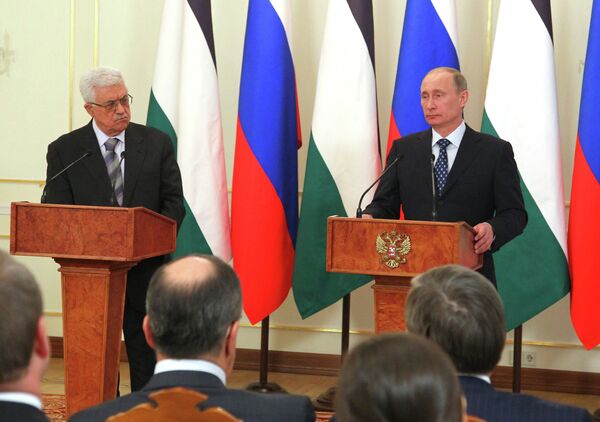 The Russian leadership pledged on Thursday to provide continued support to Palestinians in their bid to establish an independent state and to resolve a decades-long conflict with Israel.

MOSCOW, March 14 (RIA Novosti) – The Russian leadership pledged on Thursday to provide continued support to Palestinians in their bid to establish an independent state and to resolve a decades-long conflict with Israel.

Palestinian President Mahmoud Abbas met in Moscow with Russian President Vladimir Putin on Thursday, and later in the day with Prime Minister Dmitry Medvedev, during his first visit to Russia since the Palestinian Authority was recognized by the United Nations as a non-member observer state in November 2012, in a vote that amounted to an implicit recognition of Palestinian statehood. In early January, Abbas signed a decree renaming the Palestinian National Authority “the State of Palestine.”

Putin congratulated Palestine on the status of UN observer state and expressed hope that Russia and Palestine would preserve the positive trend in the development of bilateral relations.

“Relations between Russia and Palestine rest on a solid historic foundation, and this will certainly help us build our relations today and in the future," Putin said.

The sides emphasized the need to expand their strategic partnership not only on political matters, but also in economic cooperation. Russian-Palestinian trade declined by 61.8 percent to just $580,000 last year, according to the Russian Economic Development and Trade Ministry.

Putin and Abbas agreed to consider expanding trade, tourism and investment options, as well as participation of Russian companies in the restoration of the Gaza infrastructure and the construction of a power plant in the West Bank. Abbas said the two countries had agreed on a number of new investment projects, without providing any details.

In mid-February, Vladimir Kozhin, head of the presidential administrative directorate, launched the construction of a business and arts complex for Palestinians in the West Bank city of Bethlehem on Vladimir Putin Street. The project, to be financed by private sponsors, should be completed by December 2014. The complex will include a sports school, a music school and a business center.

"Russia has always supported and will continue to support your efforts to build a modern and strong Palestinian state, and will promote lasting peace in the Middle East and comprehensive development of economic and humanitarian relations with the friendly Palestine," Medvedev said.

Abbas thanked Russia for “tireless efforts to maintain peace in the region and to provide political support to the Palestinian people on their way to making Palestine independent and free.”

The Palestinians are seeking to create an independent state on the territories of the West Bank in East Jerusalem, partially occupied by Israel, and the Hamas-controlled Gaza Strip, and want Israel to withdraw from the Palestinian territories it occupied after the 1967 war.

Israel, however, refused to return to the 1967 borders and is unwilling to consider giving up a part of Jerusalem, which it says is the indivisible capital of the Jewish state.