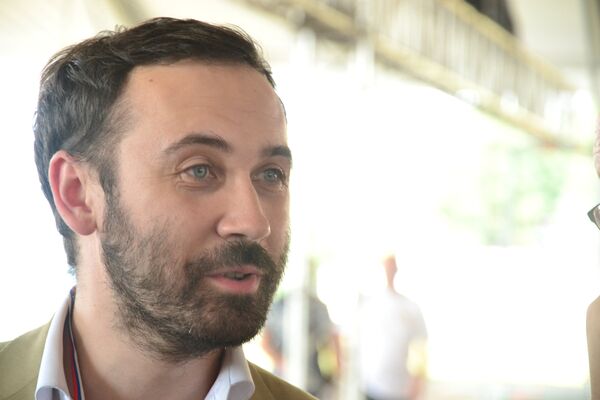 © Photo : Roman Mambetov
Subscribe
A prominent Kremlin opponent suspended his membership in the leftist A Just Russia on Tuesday after two of his fellow party members were banished from the ranks for collaborating with the opposition – a move that could cost him his lawmaker’s mandate, a party boss said.

MOSCOW, March 14 (RIA Novosti) – A prominent Kremlin opponent suspended his membership in the leftist A Just Russia on Tuesday after two of his fellow party members were banished from the ranks for collaborating with the opposition – a move that could cost him his lawmaker’s mandate, a party boss said.

“I want to create an inter-faction group [in parliament]…I can’t tell you what it’s going to be called, but the tentative title is ‘The Alternative,’” Ilya Ponomaryov, a member of the State Duma, the lower house of the Russian parliament, said at a press conference in Moscow.

Ponomaryov said he is suspending his activities as A Just Russia member to protest the expulsion of Gennady Gudkov and Dmitry Gudkov, father and son, who were purged from the party by its Supreme Council late on Monday.

It remained unclear on Tuesday whether any members of the Duma’s current lineup of 447 deputies are willing to join “The Alternative.” Gennady Gudkov volunteered to head the administration of the inter-faction group, which does not require a lawmaker’s status.

The formal reason for the Gudkovs’ expulsion was their refusal to quit the opposition’s Coordination Council, an unofficial group that aims to be the sole representative of Russia’s heterogeneous anti-Kremlin movement, which comprises forces from across the country’s entire political and ideological spectrum.

Ponomaryov said on Tuesday that he would not formally quit A Just Russia until a party congress, expected sometime this year, reviews the decision to expel the Gudkovs.

But A Just Russia head Nikolai Levichev said on Tuesday that a “suspension of membership” amounts to resignation, and that Ponomaryov’s seat in the Duma may be handed over to another party member. The move would be nearly unprecedented, and its legal grounds appear questionable, because under current Russian law a lawmaker would have to personally apply for dismissal from his parliamentary faction to lose the right to a mandate.

All three rebel lawmakers made it to the Duma in the December 2011 elections on A Just Russia’s ticket, but Gudkov Sr. was expelled by a vote spearheaded by the ruling United Russia party in September of last year over allegations of illegal business activities – a charge he said was fabricated in order to punish him for anti-Kremlin activism.

The purge was the culmination of the Gudkovs’ lengthy standoff with the leadership of A Just Russia, which was created with the Kremlin’s blessing as a spoiler for the Communist Party in 2006.

The party took a fence-sitting stance during the 2011 Duma elections, criticizing United Russia but not its bosses in the Kremlin.

Meanwhile, Ponomaryov and the Gudkovs co-organized most anti-Kremlin rallies in Moscow that came after the Duma vote in 2011 – an election that was widely believed to have been rigged. These were the biggest street protests in Russia since the early 1990s. Neither A Just Russia nor the other three parties that made it to parliament explicitly endorsed the protests.

“It’s jealousy. Jealousy about the fact that some people get things done,” Gudkov Sr. – incidentally, a former KGB officer – said at a press conference in Moscow on Thursday.

But political analysts were not impressed by the crackdown on the Gudkovs. “Most [A Just Russia] party members were not ready for the party to become noticeably, radically oppositional,” Yevgeny Minchenko, the head of the International Institute for Political Expertise, an independent for-profit think tank, told RIA Novosti.

“I actually feel sorry for A Just Russians. How strong must the pressure have been [on them] to force them into neutering themselves in public and without anesthesia,” prominent independent political analyst Marat Gelman quipped on Twitter.