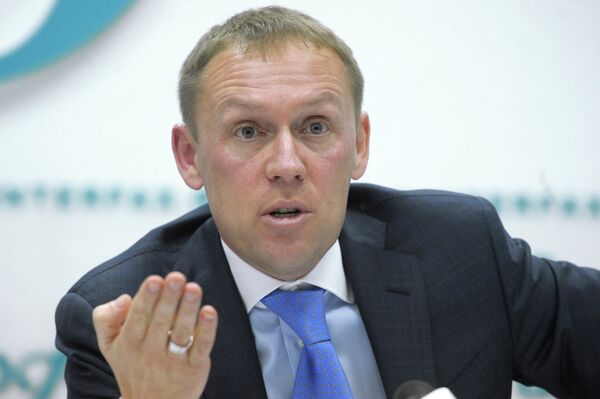 © RIA Novosti . Grigoriy Sisoev
/
Go to the photo bank
Subscribe
A former officer of Russia's Federal Security Service (FSB) suspected by the British authorities of poisoning Russian ex-spy Alexander Litvinenko said on Tuesday that he will pull out of the inquest into the killing, blaming political pressure from London.

MOSCOW, March 12 (RIA Novosti) – A former officer of Russia's Federal Security Service (FSB) suspected by the British authorities of poisoning Russian ex-spy Alexander Litvinenko said on Tuesday that he will pull out of the inquest into the killing, blaming political pressure from London.

Andrei Lugovoi, who met with Litvinenko days before his death in 2006, called a press conference in Moscow on Tuesday to announce he has lost hope of “finding justice” in Britain after Foreign Secretary William Hague asked the coroner’s inquest to withhold sensitive evidence from the public last month.

“I came to the conclusion that I won’t be able to seek justice in Britain. I did everything possible to assist the inquest, but I’ve lost faith in the British legal system,” Lugovoi, who is now a lawmaker with the nationalist LDPR party in Russia's lower house of parliament, told reporters on Tuesday.

The coroner's inquest, which has been undergoing preliminary proceedings in London for the past several months, is seeking to establish the cause of Litvinenko’s death.

Litvinenko, a 43-year-old former FSB officer, turned critic of the Kremlin and moved from Russia to Britain in 2000 where he claimed asylum. He was poisoned with the toxic radioactive isotope Polonium-210 in London in 2006, shortly after he was granted UK citizenship.

During the preliminary hearings, a counsel to the inquest said Litvinenko, who was dismissed from Russia's FSB in 1998, also worked for the British Secret Service (MI6), and the Spanish secret service.

British prosecutors have requested the extradition of Lugovoi and another Russian former intelligence, Dmitry Kovtun, over their alleged roles in Litvinenko's death. The extradition request was denied by Moscow, citing a constitutional ban on extradition.

Last month the British government asked the coroner, High Court Judge Robert Owen, to keep secret from the public some of the files related to the case. The coroner’s decision to grant the foreign secretary’s request was criticized both in London and Moscow, though for different reasons.

“We are providing all the information to the independent coroner. And the coroner himself is to make the final decision,” a Foreign Office spokesperson told RIA Novosti by phone on Tuesday, adding that it was the coroner’s decision to keep some of the evidence secret.

Lugovoi claimed on Tuesday the British authorities did not want a transparent inquest because that would fail to provide enough evidence to back the previous allegations against him and Russia.

“The British authorities won’t let me prove my innocence,” Lugovoi said on Tuesday, adding he was not planning to attend the hearings himself, but had hired a legal representative in London to speak on his behalf.

The Foreign Office spokesperson, however, dismissed Lugovoi’s accusation that the British authorities were putting pressure on the coroner.

Lugovoi also said Litvinenko’s ties to MI6 and Spanish intelligence suggested he had a lot of enemies outside Russia.

Lugovoi said he had wanted to take part in the inquest to provide evidence related to the killing.

In British legal practice, inquests by coroners are held when a person dies unexpectedly to determine the circumstances, but the process does not lead to an indictment or prosecution. Under British law, an inquest does not establish anyone's guilt or innocence in a death, but only gives the reason for the death, in one of three categories including suicide, natural causes or unlawful killing, according to Halsbury, a legal textbook.

Critics in the UK media have suggested the government's desire to keep a lid on some of the files is a sign Britain wants to smooth relations in a bid to boost bilateral trade with Russia. The Litvinenko case has been a continual obstacle to closer political ties between the two countries for years, at a time of closer commercial relations.

Lugovoi’s announcement comes a day before Foreign Secretary William Hague and Defense Secretary Philip Hammond are to meet their Russian counterparts: Foreign Minister Sergei Lavrov and Defense Minister Sergei Shoigu on Wednesday, in one of the highest level political meetings between London and Moscow for years.

Russia's Investigative Committee still holds Person of Interest status in the inquest, which allows Russian officials to present evidence to the coroner.

Inquest Judge Robert Owen said the next hearing, which will decide when the full inquest will start, would take place on Thursday.