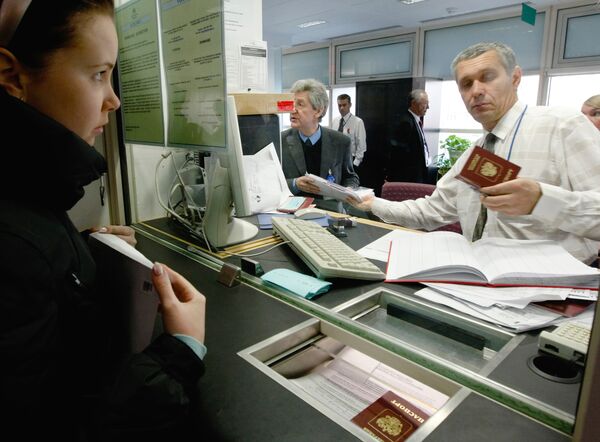 © RIA Novosti
Subscribe
Russia and the European Union (EU) on Monday agreed to continue dialog on a visa-free regime, with service passport holders likely to be allowed to travel without visas soon, but a new Russian law on personal data protection might be an obstacle to the adoption of a possible deal.

MOSCOW, March 12 (RIA Novosti) - Russia and the European Union (EU) on Monday agreed to continue dialog on a visa-free regime, with service passport holders likely to be allowed to travel without visas soon, but a new Russian law on personal data protection might be an obstacle to the adoption of a possible deal.

Russian Ambassador at Large Anvar Azimov and EU Director General for Home Affairs Stefano Manservisi met in Moscow on Monday. Manservisi told reporters after the meeting that the issue of a visa-free regime for service passport holders may be resolved in a matter of weeks, a RIA Novosti correspondent reported.

Moscow wants the EU to cancel visas for officials holding special biometric passports. Such documents are issued to employees of various state bodies, such as the presidential administration, the parliament, the Supreme Court and state corporations who travel on an official assignment.

“We recently arrived at a point where we are ready to discuss the inclusion of holders of Russian official passports,” Manservisi said at a press conference in Moscow on Monday as quoted by the Moscow Times.

He explained that the current number of about 180,000 holders of such passports should be reduced “to a meaningful number.” The Russian Foreign Ministry has said the number could be cut to those having biometric documents, giving their number at 15,000, according to the newspaper.

Meanwhile, new Russian legislation on personal data protection might hinder the visa facilitation dialog, Manservisi said. He added that the new law that obliges airlines to pass data of passengers, even transit ones, to Russian law enforcement agencies, could violate the current EU legislation and needs to be studied more thoroughly, the English-language daily reported.

Moscow has made visa-free travels with EU a foreign policy priority. Russia submitted a draft deal on scrapping the visa regime to the EU at a Russia-EU summit in 2010, but the EU has been reluctant to move ahead with the issue amid concerns that it could lead to a rise in crime and illegal immigration.

The European Commission (EC) on Monday published a list of common steps towards a visa-free regime with Russia. The steps include a requirement for both Russia and the EU to ensure document security, fight against illegal migration, transnational organized crime, terrorism and corruption.

“The European Union and the Russian Federation reiterate their international commitments related to the movement of and people-to-people contacts among their citizens, while considering possibilities for the reciprocal abolition of visas on the basis of a relevant agreement,” according to the document posted on the EC website.