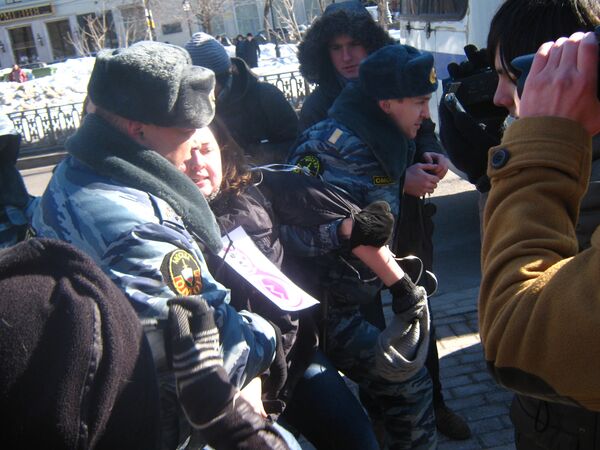 Moscow police detained 16 feminist protesters for violating public order during a sanctioned rally in the city center on Friday, the Interior Ministry reported.

"A rally, which had been agreed on with the authorities, took place on Friday in Novopushkinsky Square, involving around 100 people. At the end of the really, a group of citizens showed up who shouted slogans that had not been agreed on and who broke the rules of conducting rallies," the Interior Ministry's press service said.

The organizers stopped the meeting and asked everyone to leave, the ministry said, after which those detained were taken to a police station.

Protesters at the "Feminism Is Liberation" rally, organized by feminist activists and the Yabloko Party, claimed the police had used heavy-handed tactics to break up the protest and continued abusing activists after detaining them, OVDInfo reported.

Some of those detained were held for failing to obey the orders of a police officer, OVDInfo said.

In a separate incident in Moscow earlier on Friday, a series of single-person pickets took place outside the headquarters of the Federal Penitentiary Service, calling for the release of the two jailed members of punk group Pussy Riot, Russian media reported.

The picket participants were met by a small number of counter-protesters from an Orthodox Christian youth group, who read aloud from the Bible, the group's coordinator, Vadim Kvitkovsky, told Russian News Service.

At least ten people have been detained at this event, the Voina art collective reported on Twitter. A number of renowned public figures, among them actress Chulpan Khamatova, film director Yevgeny Mitta and journalist Oleg Kashin are expected to join the protesters.

March 8 is International Women's Day, which is traditionally celebrated in Russia as a public holiday and a special day for women.