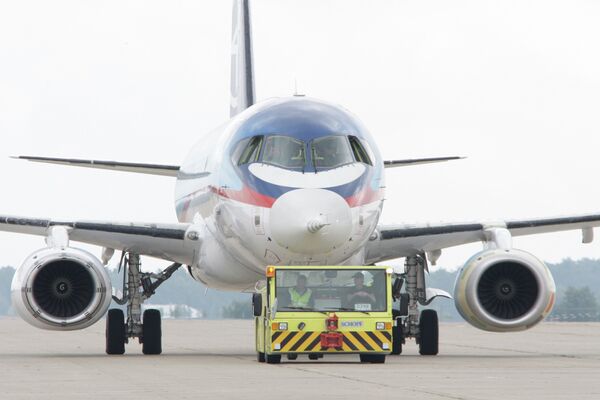 © RIA Novosti . Anton Denisov
/
Go to the photo bank
Subscribe
A Russian Sukhoi Superjet 100 (SSJ-100) airliner made an emergency landing shortly after takeoff from Moscow’s Sheremetyevo airport due to an undercarriage door problem, the Civil Defense and Emergency Situations Ministry said on Thursday.

The airplane, with 77 passengers and seven crew members onboard on a Moscow-Nizhny Novgorod route, returned to the airport having burned up its fuel in midair.

“There were no casualties,” the ministry said.

The airport information service said the Su 1226 Aeroflot flight returned to the airport for technical reasons. No further information about the flight’s status was available.

This is not the first incident involving the SSJ-100. Last May, a SSJ-100 crashed into a mountain south of Jakarta while performing a demonstration flight in Indonesia with 45 people onboard, eight of whom were Russians, including crew members and Sukhoi employees. There were no survivors.

The RRJ (Russian Regional Jet) project to develop the Sukhoi Superjet 100 airliner (available in two models: regular and extended range, both with 75 or 95 passenger seats), was launched in the early 2000s. The project was on and off until the first flight took place in May 2008, and deliveries to customers began in 2011. The airliner is manufactured at the main Sukhoi factory in Komsomolsk-on-Amur and is positioned as a new Russian design.

The Russian origin of the aircraft, however, is questionable. In fact, construction materials, fuselage elements and a set of auxiliary equipment are the only Russian elements in it. French SaM-146 engines were also jointly designed with the Saturn research-and-production association. Almost everything else is foreign-made, including avionics, the electrical system, control systems and even the auxiliary power unit.

Sukhoi developed the Superjet 100 in cooperation with US and European aviation corporations, including Boeing, Snecma, Thales, Messier Dowty, Liebherr Aerospace and Honeywell.