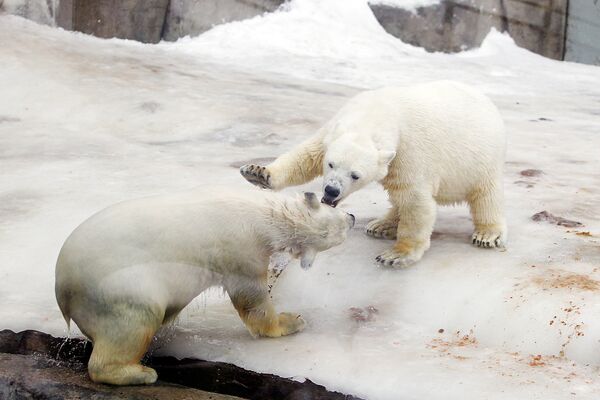 © RIA Novosti . Ruslan Krivobok
Subscribe
A US proposal supported by Russia to prohibit the exporting of polar bear parts and products like bear skin rugs, fangs and paws was rejected by an international meeting of conservationists Thursday.

WASHINGTON, March 7 (RIA Novosti) – A US proposal supported by Russia to prohibit the exporting of polar bear parts and products like bear skin rugs, fangs and paws was rejected by an international meeting of conservationists Thursday.

Delegates from the 178 member nations of the Convention on International Trade in Endangered Species voted 42-38 to reject the proposed ban at their triennial meeting in Thailand on Thursday, with 46 abstentions.

Despite deep tensions between the two countries on a range of issues, the United States and Russia had teamed ahead of the vote to back the ban on the international commercial trade of polar bears.

Only Canada, which has the world’s largest polar bear population and whose indigenous Inuit population hunt the animals, allows polar bear trade.

“We will continue to work with our partners to reduce the pressure that trade in polar bear parts puts on this iconic arctic species, even as we take on the longer-term threat that climate change poses to polar bears,” US Deputy Secretary of the Interior David Hayes said in a statement.

The US Fish and Wildlife Service said in a statement that the ban would have “contributed to long-term recovery” of polar bears, of which an estimated 20,000 to 25,000 remain.

“Each year, an average of 3,200 items made from polar bears—including skins, claws and teeth—are reported to be exported or re-exported from a range of countries,” the agency said in a statement. “Polar bear hides sell for an average of $2,000 to $5,000, while maximum hide prices have topped $12,000.”

“Each passing year that this iconic species is not protected to the fullest, is another year closer to losing the polar bear forever,” North American Regional Director for the International Fund for Animal Welfare (IFAW) Jeffrey Flocken said in a statement.

The legal Canadian trade has made it difficult for Russia to stop poachers who kill the bears in Russia and then sell their parts using phony Canadian certificates, said Flocken in an interview with RIA Novosti on Wednesday.

The United States proposed prohibiting polar bear exports in 2010, but Russia voted against it back then.

Animal protection groups say several things have changed in the last three years further endangering the polar bear: their population has declined, additional bear hunting, an increase in the price of skins and other polar bear parts, and a record loss of arctic ice that polar bears need for seal hunting.

“The situation has deteriorated significantly over the past three years, and the next conference is three years away,” said Vorontsova.

Some countries at the convention in Thailand are skeptical of the science that points to declining polar bear populations, and Terry Audla, head of an Inuit rights group, told The Associated Press (AP) that the Inuit are “managing the polar bear in a very responsible manner.”

“The world bans the seal trade, not based on science, but based on their bleeding hearts, right? Because ‘it’s so cruel,’” Audla told the AP.