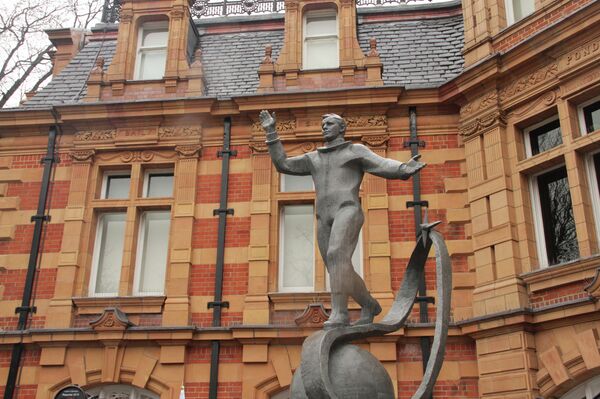 A monument to the world's first man in space, Russian cosmonaut Yury Gagarin, unveiled in London in 2011, was moved from The Mall to the Royal Observatory in Greenwich on Thursday.

LONDON, March 7 (RIA Novosti) - A monument to the world's first man in space, Russian cosmonaut Yury Gagarin, unveiled in London in 2011, was moved from The Mall to the Royal Observatory in Greenwich on Thursday.

The monument, the Russian Space Agency’s gift to the United Kingdom, was temporarily installed near the British Council headquarters on The Mall leading to Buckingham Palace, on July 14, 2011, to mark the 50th anniversary of Gagarin’s visit to London.

Gagarin’s eldest daughter Yelena, who is the director of the Moscow Kremlin museums, Russian ambassador to the United Kingdom Alexander Yakovenko and deputy Roscosmos chief Vitaly Davydov attended the ceremony.

“I would like to thank all people living in London for the support of the idea to place the statue in Greenwich park. I hope my father's statue will be evoking only smiles, and I feel very happy today for Yury Gagarin, cosmonaut and man, who was dreaming of the sky, and at the same time always dreaming of home. And finally he found this beautiful home in Greenwich,” Yelena Gagarina said at the ceremony.

The London monument is a copy of the monument to Gagarin in the town of Lyubertsy in the Moscow Region, where the future cosmonaut went to vocational school.

He met with members of the Foundry Workers Union during his visit, as he had worked as a foundryman before his career in aeronautics, as well as with the British Prime Minister Harold Macmillan and Queen Elizabeth II.