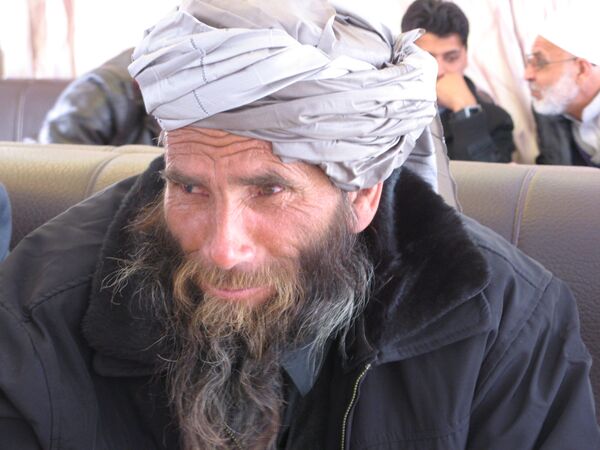 © Photo : Warriors-Internationalists Affairs Committee at the CIS Council of the Heads of Government
Subscribe

There is a traditional healer living in the Shindand District in Afghanistan, known as Sheikh Abdulla, an elderly-looking, impoverished widower with a wispy beard leading a semi-nomadic life with a local clan.

MOSCOW, March 5 (Alexey Eremenko, RIA Novosti) – There is a traditional healer living in the Shindand District in Afghanistan, known as Sheikh Abdulla, an elderly-looking, impoverished widower with a wispy beard leading a semi-nomadic life with a local clan.

His real name is Bakhretdin Khakimov and he is a Soviet soldier who has been missing in action since the first months of a nine-year-long bloody war that began when the Soviets invaded Afghanistan in late 1979.

Khakimov, an ethnic Uzbek, was tracked down two weeks ago by a search party of the Warriors-Internationalists Affairs Committee, a nonprofit, Moscow-based organization, operating under the aegis of the Commonwealth of Independent States (CIS), whose activists spent a year following the missing soldier’s decades-old trail.

That’s one down and 263 soldiers to go for the committee, which presented its latest findings in the search for Soviet servicemen in Afghanistan at a press conference in Moscow on Monday.

“Looking for missing soldiers is among our top priorities. And it’s a tough job,” said committee head Ruslan Aushev, who fought in Afghanistan and was president of the republic of Ingushetia in the Russian North Caucasus from 1993 to 2001.

The committee was set up in 1993, but its operations in Afghanistan were soon cut short by a civil war there. The Taliban, which emerged victorious in 1996, did not look kindly at former enemies, and the committee was only able to return to Afghanistan after a US-led military coalition ousted the Islamic fundamentalists from power in 2001. But then the global recession hit, depriving the committee of funding, and its search only resumed in 2009, Aushev said.

Since its inception, the committee has discovered 29 missing Soviet soldiers alive in Afghanistan. Seven of them chose to stay, while the others returned home when given the option, Aushev’s deputy, Alexander Lavrentyev, also an Afghan veteran, said at the press conference.

Khakimov is the eighth. He suffered severe head trauma during fighting in Shindand 33 years ago, when he was still a 20-year-old draftee, but was nursed back to health by a local village elder. The now-deceased Afghani, who made a living as a healer, adopted the native of the ancient Uzbek city of Samarkand and taught him the trade, Lavrentyev said.

Khakimov, who still has a nervous tic from the injury, forgot whatever Russian he knew and never tried to contact his relatives after being captured. “He was just happy he survived,” said Lavrentyev, who personally met with Khakimov in the city of Herat in western Afghanistan in late February.

But the former soldier – who married in Afghanistan, but is now a childless widower – was eager to meet his relatives, something that the committee is currently working to arrange, Lavrentyev said.

Khakimov was still luckier than many: The committee confirmed five more MIA soldiers to have been killed, and many more deaths – including of those who got blown to bits by a landmine, burned alive in tanks or aircraft, or, in at least one case, swept away by a mountain stream – can only be confirmed tentatively, Lavrentyev said.

Soviet losses in Afghanistan stood at 15,000 while a total of 600,000 Soviet soldiers served in the war, according to figures from the Soviet General Staff. By comparison, the United States, which currently has 74,000 troops in Afghanistan, lost just over 2,000 since 2001.

The committee’s operations are funded by countries of the CIS, a confederation comprising most former Soviet republics. Though the expenditures are a mere 12,000 rubles ($400) a year per missing soldier, some countries, such as Ukraine and even oil-rich Turkmenistan, dodge the financial support responsibility, Lavrentyev said.

The group, mostly comprising veterans of the Soviet-Afghan war, conducts dozens of expeditions to Afghanistan and neighboring countries every year.

Their best (often, their only) sources of information are the very warlords whom the Soviet troops were trying to kill in the 1980s. And surprisingly, the Mujahedin fighters who were busy killing the Soviet infidels three decades ago appear willing to help their old enemies – who were also building roads and schools in the country that they were trying to control.

“Those who were shooting at us are the only ones to have information – and they share it,” Lavrentyev said.

“We get very good treatment. They tell us, ‘Come back, just without the firearms. We respect you,’” Lavrentyev cited the Afghanis as saying.