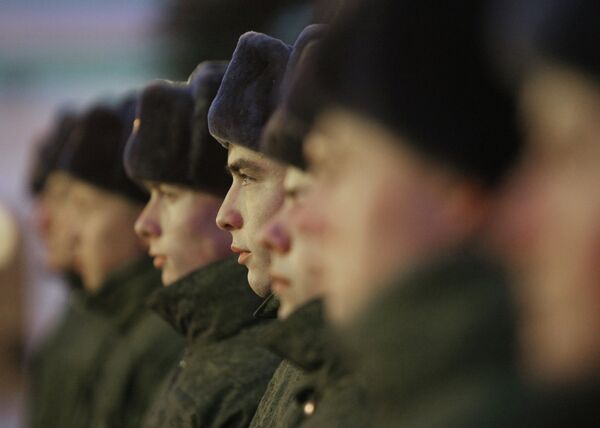 © RIA Novosti . Alexander Kryazhev
/
Go to the photo bank
Subscribe
There were about 250,000 draft dodgers in Russia last year, a General Staff official said on Tuesday.

MOSCOW, March 5 (RIA Novosti) - There were about 250,000 draft dodgers in Russia last year, a General Staff official said on Tuesday.

In 2012, 235,800 citizens dodged conscription by “falling off the Defense Ministry’s radar,” while another 8,800 people were officially served call-up notices and did not show up at induction centers, said Maj. Gen. Yevgeny Burdinsky, the deputy head of the General Staff’s Chief Organization and Mobilization Directorate.

This number is 25 percent higher than in 2011, when an estimated 200,000 young men evaded compulsory military service, according to the General Staff.

A source privy to the situation told RIA Novosti that the lists of draft dodgers who were served notices will soon be made public in some media outlets.

Last year, more than 300 draft dodgers were prosecuted, but less than 20 were given jail sentences, Burdinsky said.

The Union of Soldiers' Mothers Committee Chairwoman Valentina Melnikova suggested last year that only a small proportion of the reported delinquents are actual draft dodgers, while the rest may be people on missing persons lists, jailed convicts and others who are nevertheless required to serve in the military because of the military’s outdated or deficient records.