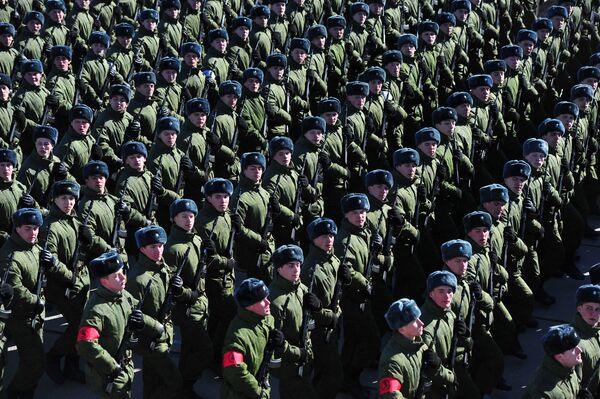 Russia's armed forces should expand to at least a million men in order for the country’s defenses to be effective, Kremlin chief of staff Sergei Ivanov said in an interview published on Tuesday.

MOSCOW, March 5 (RIA Novosti) – Russia's armed forces should expand to at least a million men in order for the country’s defenses to be effective, Kremlin chief of staff Sergei Ivanov said in an interview published on Tuesday.

“Fewer [people in the army] is already dangerous for the country. With all respect to Europe – we are not Luxembourg and not Belgium,” Ivanov, a former Defense Minister, told the Komsomolskaya Pravda tabloid daily.

“Russia has a different territory. Besides, we are a nuclear power,” he added.

The Russian forces are in the midst of a major shake-up, including a huge reequipment program, a gradual transition to fully-volunteer armed services, and organizational changes, in a bid to create forces more suitable for future challenges and less like the legacy forces left over from the Soviet era.

Part of that transition has involved large cuts to the number of servicemen. Former Defense Minister Anatoly Serdyukov announced a plan in 2008 to cut the forces from 1.2 million to under 1 million, with the number of officers to be cut from 355,000 to 150,000. He later backtracked, and in March 2011 said President Medvedev had authorized officer numbers to rise to 220,000, according to a Congressional Research Service report.

Ivanov, who ran the ministry from 2001 to 2007, praised Serdyukov's successor, newly-appointed Defense Minister Sergei Shoigu, saying he enjoys support of the military.

“Every failed launch attracts criticism, which is often justified. But I’d like to remind you that the Soviet Union’s tests of the Sineva ballistic missile had more failed launches than Bulava,” Ivanov told the paper. Only 11 of 18 or 19 test launches of the troubled Bulava have been officially declared successful, according to Russian defense analysts.