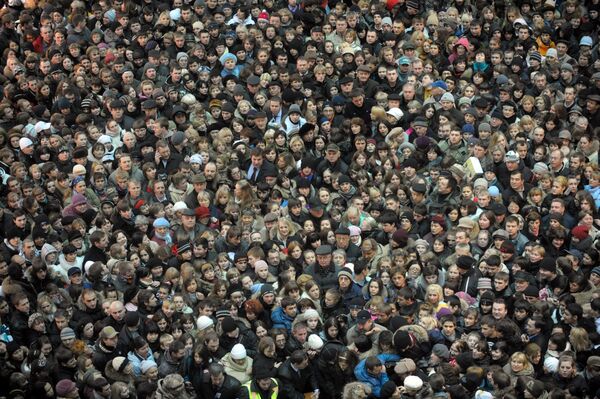 Russian police prevented hundreds of participants of a flash mob from performing the popular Harlem Shake dance in downtown St. Petersburg on Sunday.

A group of young people gathered in front of the huge Galerea shopping center on Sunday afternoon to perform the Harlem Shake, which has become a worldwide Internet dance craze.

“Come with your friends, wear extraordinary clothing and rock the city center,” the organizers posted on social media about the planned flash mob.

Around 300 people gathered for the Harlem Shake flash mob, a police spokesman said. However, some media reported up to 700 people came to perform the rambunctious dance.

The crowd was briefly dispersed by police who said they “reacted to the complaints of citizens that the group blocked the passage.” The event took place near the crowded Moskovsky railway station, a spokesman said.

“Police have cracked down on the action… the organizer, a 17-year-old man, has been taken to a police department,” the spokesman said.

Baauer's Harlem Shake was originally released in May 2012, but became a dance music sensation only this February. Earlier this month, the Harlem Shake dance was performed during a flight from Colorado Springs to San Diego by a group of students.

In Russia, the song inspired rock star Nikita Dzhigurda to film himself and a bunch of fans doing the Harlem Shake in downtown Moscow.