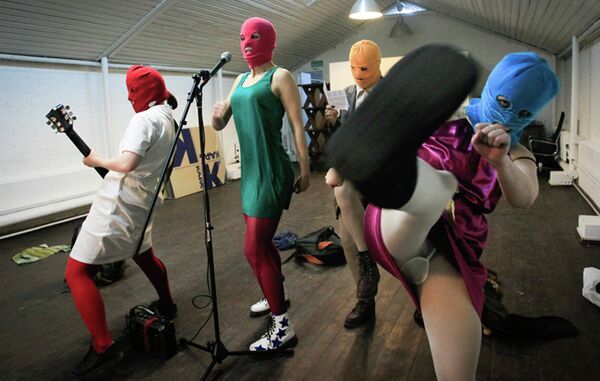 A play about the trial against Russian punk rock band Pussy Riot was interrupted in Moscow on Sunday when migration authorities came to ask the Swiss theater director for his work documents.

MOSCOW, March 3 (RIA Novosti) – A play about the trial against Russian punk rock band Pussy Riot was interrupted in Moscow on Sunday when migration authorities came to ask the Swiss theater director for his work documents.

The Moscow Trials play by director Milo Rau tells the story of the most controversial cases of the last decade, including the trial against three female activists, who were convicted of "hooliganism motivated by religious hatred" for performing an anti-Putin “punk prayer” at Moscow's Christ the Savior Cathedral last February.

Two of the group members, Nadezhda Tolokonnikova and Maria Alyokhina, were sentenced to two years in prison, while another one, Yekaterina Samutsevich, had her sentence suspended.

In the middle of the play, in which Samutsevich took part, the officials of the Russian Federal Migration Service entered the Sakharov Centre, staging the performance, and asked the Swiss director to show his work documents.

"Rau was warned about the necessity to observe Russian migration regulations," said deputy head of the service, Sergei Kalyuzhny. He said the director has a business visa only, which does not allow "work activity."

Employees of the Sakharov Centre were shocked when the migration officials arrived. “We had no idea that this could happen,” said a spokesperson for the centre, Elena Kaluzhskaya.

Shortly after the migration officials left, the performance was interrupted for a second time when dozens of people wearing Cossack uniforms stormed the building in protest of the play’s content.

Marat Gelman, a Russian gallerist, wrote on his Twitter account, “The Cossacks have come… We have been locked up, the Cossacks have surrounded the building of the Sakharov Centre. Come to save us.”

Meanwhile, a police spokesman said the situation was “calm” and “no serious violations of the law have been registered.” He added that police are on duty to ensure public security.