Russians to Rally in Support of US Adoption Ban 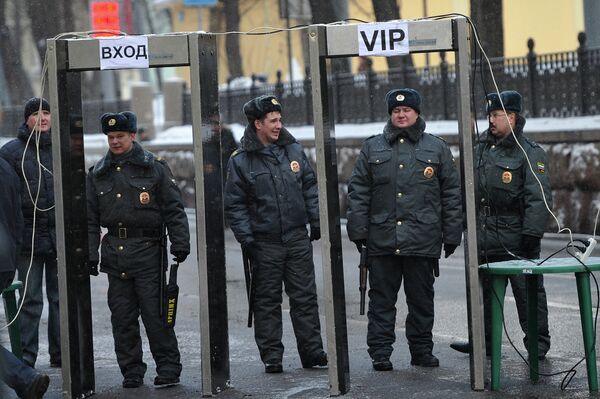 Pro-Kremlin activists are to rally in central Moscow on Saturday to urge the government to extend a ban on US families adopting Russian children to all foreign nationals.

MOSCOW, March 2 (RIA Novosti) – Pro-Kremlin activists are to rally in central Moscow on Saturday to urge the government to extend a ban on US families adopting Russian children to all foreign nationals.

The rally is organized by the All-Russia Parents Resistance organization, whose founding convention President Vladimir Putin paid a surprise visit to earlier this year. Putin is not, however, scheduled to attend Saturday’s march.

The rally comes some two months after Russia’s ban on US nationals adopting its children came into force. The law provoked fierce and frequently emotional debate in Russia, with some 30,000 people, according to organizers, rallying against the ban in Moscow in January.

Media reports said that advertisements had appeared online ahead of the march offering around $20 for people to attend the rally. Rally organizers dismissed the reports as a “provocation” by their “many enemies.”

Kremlin opponents have frequently accused the government of paying participants at rallies in support of Putin. The Kremlin has denied this, and the state-run NTV channel alleged last year that opposition protesters are paid “cookies and cash” by the US State Department to attend anti-government rallies.

Saturday’s rally comes just hours after officials in the United States said the death of a 3-year-old adopted Russian boy in Texas in January was accidental.

The Kremlin’s child rights ombudsman – who earlier this month accused the boy’s adoptive US mother of the adoptee’s murder – reacted furiously, tweeting that the investigation had been influenced by what he called “big politics.”

Ombudsman Pavel Astakhov also urged the implementation of a system to track Russian adoptees in the United States.

Russia has long expressed concern over the treatment of Russian adoptees in the United States, where around 20 children have died in the care of their US families through negligence or domestic violence since 1991. US families have adopted some 60,000 children in that time.

Russian opposition activists are also set to rally on Saturday, in defense of the social and political rights of Muscovites. The rally was organized by protest leader Sergei Udaltsov, currently under house arrest as he awaits trial on charges of plotting "mass disorder" and conspiring to overthrow Putin. But no other leading protest figures have thrown their weight behind the rally, and attendance is predicted to be low.