Rally for Putin and Children Held in Moscow 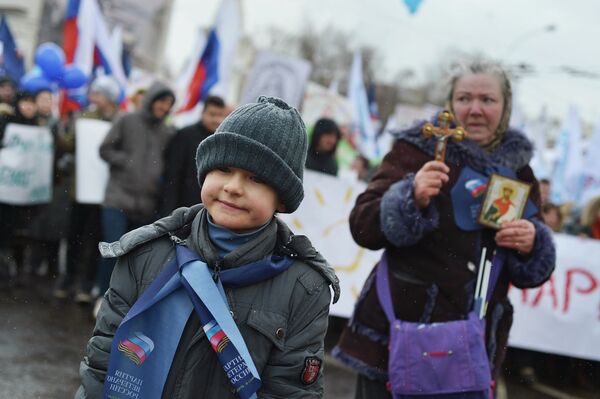 Thousands came to a state-endorsed rally against foreign adoptions in Moscow on Saturday, intended as a show of public support of the government, but marred by reports about participants coerced or paid for attending.

MOSCOW, March 2 (Alexey Eremenko, RIA Novosti) – Thousands came to a state-endorsed rally against foreign adoptions in Moscow on Saturday, intended as a show of public support of the government, but marred by reports about participants coerced or paid for attending.

What Massachusetz meant was that he was really for prohibiting foreign adoptions of Russian children, but formulating the exact reasons that brought him to the march turned out to be a trying task.

Some 12,000 attended the “Rally in Defense of Children,” according to police estimates. The column cut an impressive sight, crowding the narrow boulevards of central Moscow, bristling with colorful flags and moving to the drums of marjorettes whose ears were red from cold (it was minus 8 degrees Celsius).

However, approached from behind, the column resembled the retreating Napoleon army due to a steady trickle of deserters, many of them teenagers dancing in the snow to toothache-inducing pop blasting from amps along the way.

Several participants only offered ironic smiles and identical confessions of being “too embarrassed” to talk to press when asked by RIA Novosti about their reasons to attend.

Speakers – a mix of second-tier pro-government politicians and legislators, and children rights activists – said the event was meant to lobby for new legislation stimulating domestic adoptions.

This goal, however, was met before it was even voiced: In January, President Vladimir Putin ordered to draft a list of measures to that very end – even as he banned adoptions of Russian children by American nationals.

The ban was officially blamed on American officials’ inability to provide Russia with information about the fate of Russian adoptees. But critics claimed it was a backlash against the US Magnitsky Act, which imposed last fall sanctions against Russian officials accused of rights abuse.

Tensions reached uncharted heights after Russia’s children ombudsman Pavel Astakhov reported last month that the three-year-old Maxim Kuzmin, adopted from Pskov Region by a Texan couple last fall along with his brother Kirill, 2, died due to abuse by his new mother.

The story was debunked by US officials, with the autopsy confirming the death to be an accident. But participants of the Saturday rally nevertheless demanded to bring Kirill Kuzmin back to Russia, an ongoing petition drive to this end gathering 14,000 signatures as of Saturday, according to the organizers.

About 60,000 Russian children were adopted to the United States since the early 1990s, according to official statistics. Twenty of them died due to actions of their parents.

The sincerity of rally goers’ concerns was put into question ahead of the event due to online ads offering payments of 300 to 700 rubles ($10 to $23) for attending. The claim was vehemently rejected by the organizers, who called it “a smear campaign,” but RBC news website reported at least one group of people being paid 500 rubles per person after the rally.

Opposition-minded media also speculated that the authorities could force state employees to attend the rally, a Soviet-era practice that was confirmed to have been employed at pro-government rallies last year. No coercion was confirmed on Saturday, though many participants were indeed state employees arriving in organized groups.

Students of at least one Moscow college were also forced to attend by their administration, the Russian Student Union said on Saturday.

In any case, most participants departed immediately after nearing the stage, ignoring speakers praising Putin and denouncing “American sadists.” Many discarded balloons and, in some cases, placards that they toted.

“Back in the day, you drop a portrait of Stalin at a rally, you get 10 years behind bars. It’s not like it used to be,” a middle-aged woman told her friend in the crowd. She was hugging a furled banner herself as she headed for the metro.