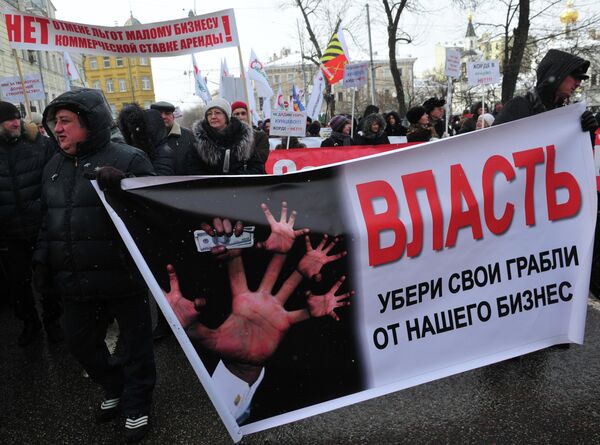 Russian opposition, often accused of ignoring the everyday concerns of the general public, held on Saturday a “Social March” aimed against policies of the Moscow City Hall, but in absence of a clear news peg, attendance figures were low and participants skeptical.

MOSCOW, March 2 (Alexey Eremenko, RIA Novosti) – Russian opposition, often accused of ignoring the everyday concerns of the general public, held on Saturday a “Social March” aimed against policies of the Moscow City Hall, but in absence of a clear news peg, attendance figures were low and participants skeptical.

“I don’t think a lot will come of this [rally],” said Vladimir Sidorov, 73, a retired historian.

Police estimated the turnout at the march in central Moscow at 1,000. Organizers spoke of 5,000 while Russian media covering the event put the figure at between 2,000 and 3,000.

Tens of thousands rallied in Moscow in late 2011 and 2012 to protest against alleged vote fraud at the parliamentary and presidential elections, though they failed to pressure the government into ordering a repeat vote.

Reacting to the criticism, organizers of the Saturday rally offered a lengthy list of “social” demands targeting Muscovites’ needs, including salary and pension hikes, a revamp of the utilities payments system, a revision of the city development plan, an administrative reform and solutions to environmental and traffic problems plaguing the city of 12 million.

The broad agenda managed to lure out plenty of elderly city residents, who appeared to comprise a higher than usual percentage of the crowd. Activists of numerous opposition parties and groups, including the Left Front and Yabloko, were also present – but the event lacked younger urbanites without set political affiliations who comprised the backbone of the recent protests.

A slump in street activity after the elections was predicted by most political analysts, who said the opposition-minded public would be reluctant to rally without a clear reason.

But co-organizer of the “Social March,” firebrand leftist leader Sergei Udaltsov, said earlier that the rallies have to go on in order to maintain pressure on the Kremlin.

Not even all participants seemed to agree, however. “The important thing is that it helps people change and grow. But it doesn’t work on the authorities,” historian Sidorov said about the rally.

Saturday’s event will also kickstart the opposition’s campaign for the city legislature elections in 2014 and the mayoral vote of 2015, organizers said.

Udaltsov was forced to skip the event, being under house arrest on charges of preparing mass riots, an accusation he calls fabricated. Only a few prominent opposition leaders gave speeches at the rally, among them its co-organizer Ilya Ponomaryov and Yabloko head Sergei Mitrokhin.

Turnout could also have been hampered by ideological restrictions: Both nationalist and LGBT insignia were banned at the rally.

“Social Marches” also took place on Saturday in several other Russian cities; the biggest turnout was reported in St. Petersburg, where some 400 activists showed up.

About 12,000 people, according to police estimates, attended a pro-government rally elsewhere in Moscow on the same day aimed against foreign adoptions and in support of the Kremlin's policies on the matter. Though the two events were formally unrelated, speakers at both rallies denouced the rival events.