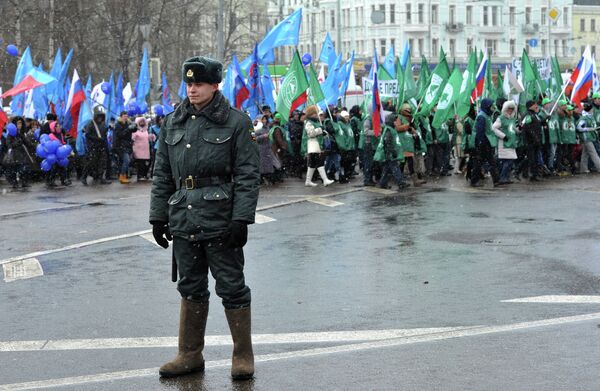 Moscow police will investigate complaints against the organizers of Saturday’s state-endorsed rally against foreign adoptions who allegedly refused to pay its participants for attending the event.

MOSCOW, March 2 (RIA Novosti) – Moscow police will investigate complaints against the organizers of Saturday’s state-endorsed rally against foreign adoptions who allegedly refused to pay its participants for attending the event.

Some 20 participants have filed complaints against a rally coordinator, who allegedly refused to pay them for their participation, an activist of an opposition group Rosagit, Vadim Korovin, wrote on his Twitter account.

The report was confirmed by a statement made by a police spokesman, “A group of citizens came to a Moscow’s Tverskoy District police department today saying a person had promised to pay them for participating in a rally in downtown Moscow on Saturday, but failed to reward them after the rally ended.”

The spokesman said the alleged scammer, called Pavel, must show up at the police department upon “first request.” He has not excluded however that the alleged fraud could also be a ‘provocation’ against the rally organizers.

Some 12,000 attended the “Rally in Defense of Children,” intended as a show of public support of the government. The sincerity of rally goers’ concerns was put into question ahead of the event due to online ads offering payments of 300 to 700 rubles ($10 to $23) for attending.

The claim was vehemently rejected by the organizers, who called it “a smear campaign,” but RBC news website reported at least one group of people being paid 500 rubles per person after the rally.