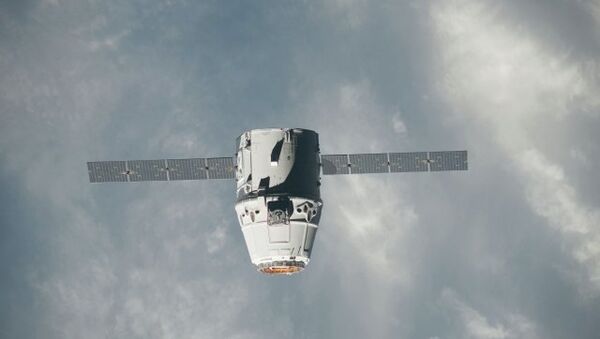 © NASA
Subscribe
Specialists of a private US company, SpaceX, have started all thrusters of its Dragon capsule launched on Friday, SpaceX founder and CEO Elon Musk said on Saturday, Moscow time.

MOSCOW, March 2 (RIA Novosti) - Specialists of a private US company, SpaceX, have started all thrusters of its Dragon capsule launched on Friday, SpaceX founder and CEO Elon Musk said on Saturday, Moscow time.

A Falcon 9 rocket carrying the Dragon spacecraft on a second resupply mission to the International Space Station (ISS) lifted off at 10:10 a.m. EST (15:10 GMT) from Space Launch Complex 40 at Cape Canaveral Air Force Station in Florida. Shorty after the launch, the capsule experienced an issue with its thruster pods. Pods 1 and 4 were fixed earlier on Saturday.

Dragon has 18 Draco thrusters used for orbital maneuvers, divided into four groups - two groups of four engines each and two - of five engines each. With all its 18 engines now operational, the spacecraft has successfully performed a maneuver to raise its orbit.

The Dragon spacecraft is carrying 1,268 pounds (575 kg) of supplies for the space station crew and for experiments being conducted aboard the orbiting laboratory, NASA reported earlier.

The space freighter is expected to dock with the Earth-facing port of the space station's Harmony module where it will remain for a few weeks while astronauts unload cargo and load the craft with 2,668 pounds (1,210 kg) of Earth-bound experiment samples and equipment. The docking, initially scheduled for Saturday, was delayed by the thruster failure.

“Dragon will not be able to berth at the International Space Station tomorrow as planned,” NASA said on its website.

Musk told a news conference on Friday night that even after the failure the company was still hoping to dock with the ISS on Sunday. NASA confirmed the information on its web page.

“The next opportunity for Dragon to rendezvous with the International Space Station is early Sunday, if SpaceX and NASA determine the spacecraft is in the proper configuration and ready to support an attempt,” NASA said.

No serious malfunctions were recorded during the two previous Dragon launches, both in 2012. The Dragon made a demonstration flight to the space station in May and carried out the first resupply mission in October, delivering more than 1,000 lbs (some 450 kg) of cargo to the ISS.

Dragon’s third mission to the ISS is expected in the fall of 2013. The spacecraft will be launched on board a modernized version of the Falcon 9 rocket.

The Dragon is a reusable spacecraft developed by SpaceX to fly cargo to the ISS after NASA retired its space shuttle fleet last year. The spacecraft is capable of carrying more than 7,000 pounds (3,175 kg) of cargo split between pressurized and unpressurized sections, according to NASA.

Under a $1.6-billion Commercial Resupply Services contract, SpaceX is to carry out at least 12 flights to the ISS.