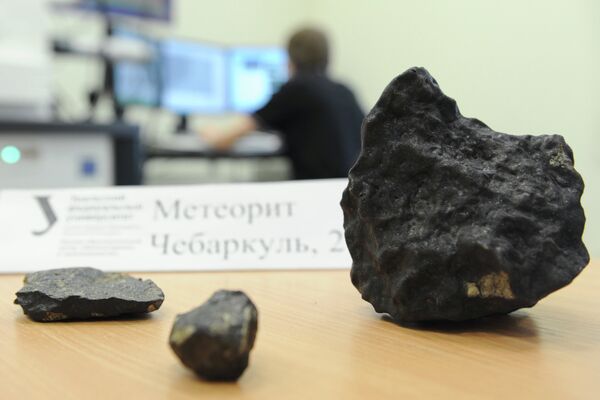 Scientists will hold off searching for fragments of the Chelyabinsk meteorite until the spring thaw as heavy snowfall hampers their work.

MOSCOW, March 1 (RIA Novosti) – Scientists will hold off searching for fragments of the Chelyabinsk meteorite until the spring thaw as heavy snowfall hampers their work.

“All traces have been covered with snow, and it would be hard to find anything until spring,” Mikhail Nazarov from the Institute of Geochemistry and Analytical Chemistry told RIA Novosti on Thursday.

Nazarov said a group of scientists from his institute worked at the site of the meteorite fall in the Urals region for almost two weeks and found about 1.5 kilograms (3.3 lbs) of fragments.

“But further search will be most likely suspended,” he said.

Scientists from Russia's Urals Federal University, who have found the largest meteorite fragment so far, weighing more than one kilogram (2.2 lbs), will also hold off their search until the thaw.

“The weather in the region is very bad with heavy snowfall. We will have to wait until the thaw starts,” said Viktor Grokhovsky, a researcher from the Urals Federal University.

Both scientists complained that local residents interfered with the work of the scientific teams and gathered more fragments than researchers without reporting the findings to the authorities.

“The local population is actively involved in the search, and nobody knows how many fragments they have found,” Nazarov said.

Gorokhovsky estimated that local residents could have gathered some 10-15 kilograms (up to 33.3 lbs) of fragments while his team discovered some 2.5 kg (5.5 lbs).

A flaming meteorite streaked across the sky and slammed into central Russia on February 15, injuring more than 1,000 people and damaging thousands of buildings around the city of Chelyabinsk.

US space agency NASA estimates the meteorite was roughly 15 meters (50 feet) in diameter and weighed 7-8 thousand tons when it struck Earth's atmosphere. The meteor struck the Earth's atmosphere with the intensity of 30 Hiroshima bombs, NASA scientists said.