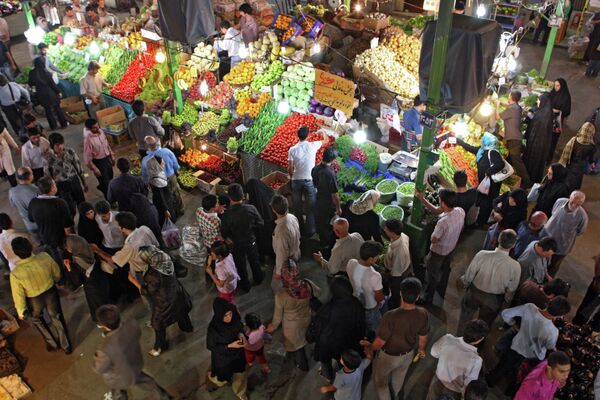 Last October, after the Iranian rial lost half its value against the dollar in the space of a week, hundreds of Tehran’s “bazaaris,” or small merchants, took to the streets chanting, “Death to this hypocrite government!”

TEHRAN/MOSCOW, February 28 (Alexey Eremenko, RIA Novosti) – Last October, after the Iranian rial lost half its value against the dollar in the space of a week, hundreds of Tehran’s “bazaaris,” or small merchants, took to the streets chanting, “Death to this hypocrite government!”

Police dispersed them, but with surprising reserve, arresting a mere 16 people, while state media downplayed the incident. And for good reason: The bazaaris make up one of the Iranian regime’s main constituencies, and if they’re turning against the government, then something is rotten in the Islamic republic.

The bazaaris’ main gripe in October had to do with the plummeting currency, which sent the prices of imported goods through the roof, hurting businesses nationwide. But this was only one item on a lengthy list of economic hardships that have hit Iranians with increasing intensity since the latest batch of international sanctions in 2011.

With presidential polls set for June 14, less than four months away, the million-dollar question is whether large-scale dissent will spill into the open as it did in 2009-2010, when Iran saw its biggest street protests in 30 years, triggered by allegations of foul play in the previous presidential race.

Those rallies – ruthlessly suppressed by the authorities – were driven by justice-seeking urbanites; this year, if “economic” protesters like the bazaaris start demonstrating en masse, the situation could spiral out of control – at least, the control of the clerical regime.

Whether it does or not, Iranians’ deteriorating living standards are sure to figure prominently in the coming battle for the presidency.

For now, state propaganda is pinning blame for the economic troubles on the foreign sanctions aimed at Iran’s nuclear program, discussed, inconclusively, at a high-profile multilateral meeting this week. But many analysts and ordinary Iranians alike believe homegrown policies have done at least as much damage to the country’s economy.

“You can chant ‘down with USA’ all you want, but when you come home and find that the menu you can offer your kids is shrinking day after day, you start to have doubts [about the government],” said Viktor Mizin, an expert on Iran with the Moscow State Institute of International Relations (MGIMO).

The government is clearly nervous: Last fall it went so far as to instruct state television to avoid depictions of sumptuous meals that could irk viewers, according to foreign media reports.

Even the head of Iran’s Revolutionary Guards – a branch of the military tasked with suppressing domestic dissent – acknowledged in January that the economic woes could unleash disturbances.

Meanwhile, the ruling establishment has been engaging in pre-emptive damage control – cracking down on dissent, fiddling with electoral legislation and accentuating the positive through propaganda.

How discontented Iranians will respond is anyone’s guess: Will there be another wave of election-related unrest? Or has the grim fate of the last protests dampened the spirits of the opposition-minded? Will they give vent to their grievances at the ballot box? Or stay home?

“Iranian people don’t want a real democracy, they just want a shah under a different name,” he said in a wistful tone.

Iran’s economy had been ailing long before the sanctions, but they have certainly exacerbated its problems.

Though reliable statistics from the country are notoriously hard to come by, official exchange rates suggest the rial has lost two-thirds of its value against the dollar since 2011. Prices for consumer goods and commodities rose by 87 and 112 percent, respectively, in the same period, according to a detailed report released this week by the International Crisis Group (ICG), a Brussels-based, nongovernmental research and advocacy organization.

Official figures released by Iran’s parliament say the economy grew a meager 0.36 percent in 2012, according to the state-run Mehr news agency, though the International Monetary Fund estimated a contraction of 0.9 percent.

The sanctions have dealt a major blow to oil revenues, which make up between 60 and 80 percent of the national budget, according to Vladimir Sazhin, an expert on Iran with the Institute of Oriental Studies at the Russian Academy of Sciences in Moscow. The ICG report said these revenues have shrunk by nearly 50 percent since last year.

“The sanctions have had an impact,” said Ibrahim, a gray-haired bazaari, in a quiet voice, weighing every word. “But we are persevering.”

He trades at Tehran’s Grand Bazaar, selling locally made Pepsi for 10,000 rials, or 27 US cents, per can. Before the latest wave of sanctions, the drink sold for 6,000 rials. Now, most customers are buying cheaper, domestic brands.

However, while the sanctions’ impact shouldn’t be underestimated, their relative role in Iran’s economic troubles is difficult to disentangle from other factors.

Quite a few analysts, including several interviewed for this article, lay at least partial blame on the government’s handling of the economy. And one of the most controversial policies has been a reform program spearheaded by outgoing President Mahmoud Ahmadinejad, who in 2010 slashed the country’s immense fuel and food subsidies, estimated by experts at between $30 billion and $100 billion a year.

The move drove up consumer prices and boosted inflation, which stood at 28.7 percent for the year ending on January 19, according to Iran’s Central Bank – the highest inflation rate in 17 years, according to the ICG report.

Though the reforms were initially supported by the government and the parliament, the main blame, in the public’s eye, lies with Ahmadinejad, who was denounced by the protesting bazaaris in October and, according to ICG, repeatedly slammed at Friday prayers.

Those angling to take Ahmadinejad’s place have been quick to point out the flaws.

“Better economic management could have halved the impact of the sanctions,” said Hooshang Amirahmadi, an Iranian-born, US-based academic who directs the Center for Middle Eastern Studies at Rutgers University and has announced his candidacy for Iran’s presidential election.

Mindful of the upcoming elections, authorities have adopted a multi-pronged approach to ensure against unrest.

State propaganda downplays the economic troubles, blaming them on Western sanctions, said Sazhin of the Institute of Oriental Studies.

But the public is not easily fooled, he added: “People are blaming Ahmadinejad for the reforms and for allowing the sanctions to be imposed.”

Meanwhile, the screws are getting tighter on those perceived as potential troublemakers: In late January, more than a dozen journalists from publications considered reformist were detained – on allegations of spying for Western powers, no less.

“They weren’t spies, but they maintained contacts with those who emigrated after the events of 2009. This is the only reason we can think of for the allegations,” a colleague of one of the arrested reporters told RIA Novosti on condition of anonymity.

Law-enforcement officials also seem to have renewed their crackdown on satellite dishes in the countryside last week, citing the need to counter the “cultural offensive” offered by foreign broadcasts, the opposition group National Council of Resistance of Iran reported on its website. Satellite dishes, which provide access to all the world's leading television channels, including foreign news, are formally banned in Iran, but officials typically overlook their presence.

If the regime is twitchy, it’s no surprise: The opposition rallies of 2009-2010 were the biggest since the Islamic revolution of 1979 – and last time, the bazaaris stayed out of it.

The protests were triggered by allegations that Ahmadinejad had secured reelection by stealing up to 14 million votes from his main rival, Mir-Hossein Mousavi, who came from the “reformist” faction advocating moderately liberal changes.

Between two and three million people, by Time magazine's estimates, rallied in the streets of Tehran in 2009 at the peak of the protests, collectively dubbed the Green Movement because of Mousavi's campaign colors.

Though peaceful, the rallies were eventually dispersed by police and the pro-government militia, the Basij, on the orders of Supreme Leader Ali Khamenei. At least 36 civilians were killed, by government estimates; 4,000 were arrested, according to Iranian PressTV. Many detainees reported prison abuse, including rape. Mousavi has been under house arrest since early 2011.

The 2009-2010 protests were purely political, according to MGIMO’s Mizin, led by intelligentsia and the middle-class, which are receptive to Western culture and disapprove of the Iranian leadership’s authoritarian tendencies.

Their discontent was suppressed but not eliminated and, this time, it could get a boost from once politically passive Iranians driven to dissent by the flagging economy, he said.

In this election cycle, the reformists are out of the picture, as public opinion holds them partly responsible for the 2009 violence, Sazhin said.

“I voted for Mousavi, but I’m disappointed in him because of the unrest after the elections,” Houssein, a bazaari, told RIA Novosti in Tehran earlier this month.

But a scramble for power is inevitable, given that Ahmadinejad, who has served two consecutive terms in office, is required by the constitution to vacate his seat.

Only a few candidates have announced their bids thus far. In 2009, a whopping 476 applied to run, but the Guardian Council – a clerical body overseeing the elections – only allowed four on the ballot.

The real competition this year will be between moderate Islamists from the camp of Akbar Hashemi Rafsanjani, Iran’s president in 1989-1997, who are ready for constructive cooperation with the West, including on the nuclear program, and hardliners who would make even Ahmadinejad look liberal, said Sazhin of the Institute of Oriental Studies.

Ahmadinejad is reported to have picked a tentative successor in his chief of staff, Esfandiar Rahim Mashaei, 52. But the outgoing president has fallen out of favor with Supreme Leader Khamenei, which – coupled with his presumed unpopularity with the public (no independent polls from Iran are available) and powerful enemies in parliament – could undermine Mashaei’s chances.

The president is not going down without a fight: Ahmadinejad registered a heated protest after the Guardian Council recently changed election legislation, diminishing the government’s control over the procedure. But analysts speculate the change could have been a pre-emptive measure to prevent Ahmadinejad from bringing his nominee to power by meddling with the ballots.

Analysts and politicians insist the majority of the Iranian population wants change.

“If even the head of the Revolutionary Guards cannot rule out unrest, how can we deny this possibility?” said Ahmiramadi, the US-based presidential candidate. “But no one will benefit from it.”

“I don’t think the protest mood has dissipated,” Sazhin agreed. “The discontent is brewing, and it’s a real explosion hazard.”

But with Ahmadinejad on his way out, and the authorities busy with a clampdown on dissent, it remains unclear whether the public would really take to the streets or just give vent to their frustration at the polls.

“Muddling through has been the golden formula for this country’s survival over several millennia,” an unnamed Iranian ex-official was quoted as saying in the ICG report.

Ibrahim, the elderly Tehran bazaari, politely but firmly declined to discuss either domestic economic reforms or his electoral preferences with RIA Novosti.

His silence rings out with “what ifs,” and the political choices he and those like him make in June could prove momentous for Iran’s regime.