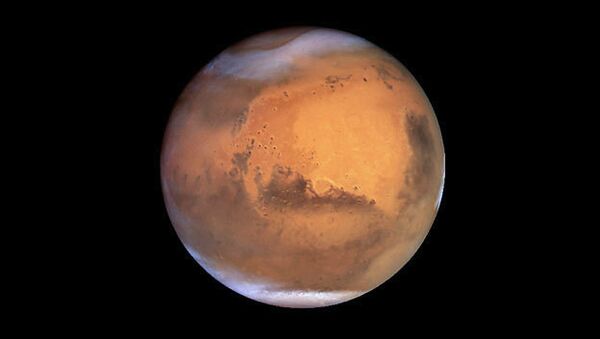 New observations confirm that a comet heading toward Mars could collide with it in October 2014, possibly ushering in radical environmental change on the Red Planet, astronomy enthusiasts said.

MOSCOW, February 28 (RIA Novosti) – New observations confirm that a comet heading toward Mars could collide with it in October 2014, possibly ushering in radical environmental change on the Red Planet, astronomy enthusiasts said.

The C/2013 A1 comet may pass as close as 37,000 kilometers (23,000 miles) from the surface of Mars, according to data published on Wednesday by the New Mexico-based ISON-NM observatory.

More precise data will be available after further observation of the comet, said Elenin, who works at the Keldysh Institute of Applied Mathematics at the Russian Academy of Sciences and has already discovered two comets – though not the C/2013 A1, first identified as a comet in January by the Australia-based Siding Spring observatory, which confirmed the possibility of the comet’s collision with Mars on its website.

A possible impact would release up to 20 billion megatons of energy and leave a crater 500 kilometers (310 miles) wide and two kilometers (1.2 miles) deep, given that the comet is 10 to 50 kilometers wide and moving at a speed of 56 kilometers (35 miles) per second in respect to the planet, according to ISON-NM’s data.

A collision with C/2013 A1 could result in a radical transformation of Mars, said Robert Matson, an aerospace engineer and meteor expert who worked with members of the Finnish Fireball Working Group of the Ursa Astronomical Association, according to the UniverseToday.com space news website.

The blow could either enhance the greenhouse effect, resulting in a thicker atmosphere, or cause surface temperature on Mars to plummet because the dust would obscure the Sun, Matson said.

The comet could also trigger volcanic activity at the impact site, he said.

Even if C/2013 A1 misses Mars, the planet will certainly pass through its coma, or gaseous envelope, which is 100,000 kilometers (62,000 miles) in diameter, Elenin wrote on ISON-NM’s website. A NASA probe, MAVEN, is scheduled for launch into Mars’ orbit in September 2014. This will enable NASA to closely monitor the comet’s trajectory.