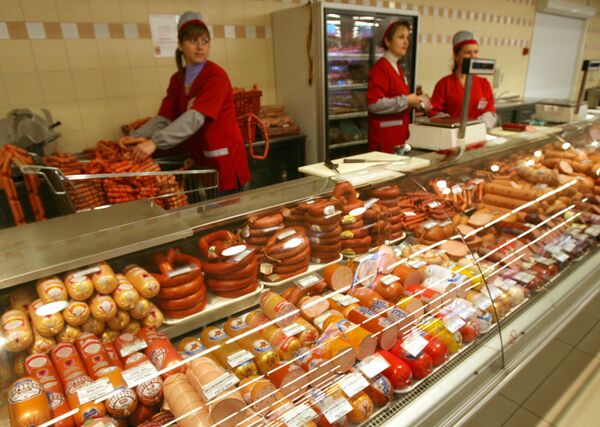 © RIA Novosti . Valery Titievsky
/
Go to the photo bank
Subscribe
As the horsemeat scandal gallops across Europe, ensnaring Swedish furniture giant IKEA for equine traces in its meatballs, and exporters of sausage to Russia, a handful of US entrepreneurs are waiting for Washington to open the starting gate and allow them to slaughter horses for human consumption.

WASHINGTON, February 27 (By Carl Schreck for RIA Novosti) – As the horsemeat scandal gallops across Europe, ensnaring Swedish furniture giant IKEA for equine traces in its meatballs, and exporters of sausage to Russia, a handful of US entrepreneurs are waiting for Washington to open the starting gate and allow them to slaughter horses for human consumption.

“I’ve had calls from no less than a dozen restaurants in New York and across the country telling me, ‘We want horsemeat as soon as we can get it,’” said Dave Duquette, a horse trainer who heads the Oregon-based group United Horsemen, which advocates for domestic US horsemeat production.

“These are upper-end restaurants,” added Duquette, who said he works with four plants seeking to begin slaughtering horses in the United States.

The last horse-slaughtering plant in the United States was shut down in 2007 following a federal ban on the practice. But the US government lifted the ban in 2011 following a report by the US Government Accountability Office (GAO) that said the horses were simply being sent across the border to Canada or Mexico to be killed for pet food or human consumption.

Horsemeat is regularly eaten in several European countries, as well as in China, Russia and Central Asian nations like Kazakhstan and Mongolia. For Americans, however, equine edibles are widely taboo.

Little data exists on the amount of horsemeat that Americans eat, though Duquette told RIA Novosti on Wednesday that there are various US-based ethnic groups for whom horse is a regular aspect of their diet and “who are excited” for domestic horsemeat production to ramp up.

Duquette said he believes horsemeat—which is leaner and contains more omega-3 fatty acids than beef—can find a place at the American dinner table.

“It’s the most nutritious red meat there is,” he said.

Others in the US meat industry are skeptical.

“There is little demand for horsemeat in the US so there is no incentive for a horse slaughter plant to sell the meat domestically,” Texas A&M University professor Davey Griffin wrote recently in a blog post at the American Meat Institute’s website.

Even entrepreneurs who stand to benefit from a spike in US horse consumption are skeptical about pushing the product on the domestic market.

“You get the animal rights activists riled up right away, wanting to fight,” said Rick De Los Santos, owner of Valley Meat in New Mexico, which is currently waiting for approval from the US Department of Agriculture (USDA) to begin slaughtering horses.

“I don’t think I would pursue a market here in the United States,” De Los Santos added. “Why even go there?”

De Los Santos’ plant is currently idle while he awaits a grant of inspection from the USDA’s Food Safety and Inspection Service, which did not respond to requests for comment Wednesday.

Inspection service spokesman Brian Mabry told The New York Times this week, however, that “two establishments” had applied for a grant of inspection “exclusively for equine slaughter” after the federal government lifted the ban in November 2011.

De Los Santos told RIA Novosti that he plans to ship the slaughtered horses to Mexico, Russia and China through a broker in Minnesota, but with bureaucratic delays, he has no idea when his plant will begin operating.

“We could immediately hire 100 people to go to work,” he said. “With the times we’re in right now, that’s a lot. The trickle-down effect could mean 500 jobs down the line.”

Duquette noted that horsemeat has historically found a place at American dinner tables during difficult economic times, most recently during World War II.

“The amount of horsemeat during any type of economic crisis has always risen,” he said. “Horsemeat is always 50 percent less than beef cost-wise.”

The GAO report on domestic horse slaughtering noted a reduction in the cost of horses since the 2007 ban, in particular for lower-valued horses, though it noted that comprehensive data on cost trends is difficult to come by.

A shift in the public mindset is unlikely anytime soon on the issue of mass horsemeat consumption in the United States, however, added food history expert Adrienne Hall, a professor at Drexel University.

“Horses are basically pets, and there’s such a connection with people who have horses,” Hall said. “Most of us look at horses as these beautiful animals, and to consume them would be just wrong.”