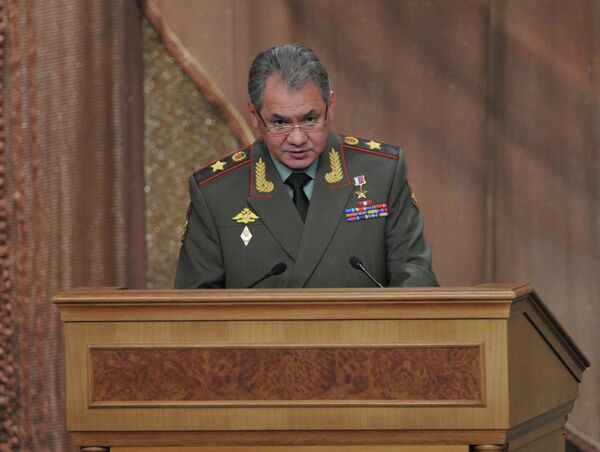 © RIA Novosti . Alexei Nikolskiy
/
Go to the photo bank
Subscribe
Russian Defense Minister Sergei Shoigu on Wednesday criticized the performance of some defense-related agencies, as well as mistakes made by his predecessor Anatoly Serdyukov.

MOSCOW, February 27 (RIA Novosti) - Russian Defense Minister Sergei Shoigu on Wednesday criticized the performance of some defense-related agencies, as well as mistakes made by his predecessor Anatoly Serdyukov.

Shoigu in particular lashed out at scandal-hit Oboronservis, a defense property management firm, which he said has failed to fulfil its contracts with the state.

“Only 80 percent of the work on 79 contracts, worth a total of 118.2 billion rubles (about $4 billion) has been fulfilled in 2011-12,” he told a meeting of senior officers at the Defense Ministry chaired by President Vladimir Putin. The state has provided 100 percent funding for those contracts, he said.

Oboronservis has been at the center of a string of high-profile scandals involving alleged real estate fraud involving state assets. An investigation into suspected fraud involving property worth about $130 million at Oboronservis led to Serdyukov's sacking late last year.

Several people have been charged in the case so far. Yekaterina Smetanova, a former executive at Oboronservis and key suspect in that investigation, was detained on fraud charges in October last year and signed a pretrial plea bargain agreement shortly after her arrest.

Shoigu also criticized a decision during on Serdyukov’s tenure to reduce the number of garrison towns to 192, adding their number will now increase to 495 by 2017. He did not say what the current number was.

Shoigu reiterated his support, however, for the system of outsourcing introduced under Serdyukov.

“The decision to transfer extraneous functions [from the Defense Ministry to outside contractors] was absolutely justified,” Shoigu said.

More than 14,000 servicemen have returned to their direct defense and combat duties as a result of outsourcing and another 5,000 will be released from inappropriate functions by the end of the year, he said.

Commenting on Serdyukov's legacy, President Putin said not all the decisions previously made on Russian military reform had proved to be useful, but constant shifts in the general course of the reform were unacceptable.

The Russian armed forces are in the midst of a major shake-up, including a huge reequipment program, a gradual transition to fully-volunteer armed services, and organizational changes, in a bid to create forces more suitable for future challenges and less like the legacy forces left over from the Soviet era.