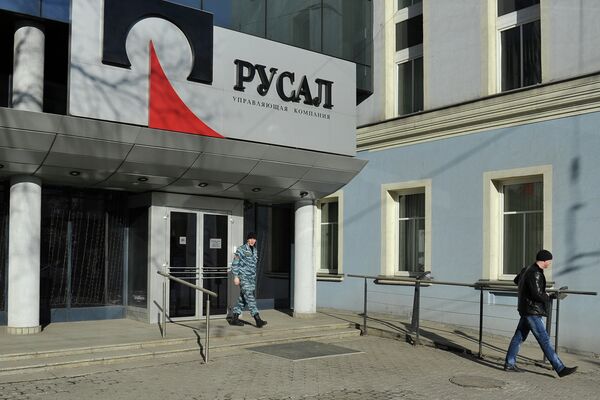 Investigators searched the Moscow offices of RUSAL, the world's biggest aluminum company, on Tuesday over claims a subsidiary had not paid almost $7 million in tax.

MOSCOW, February 26 (RIA Novosti) - Investigators searched the Moscow offices of RUSAL, the world's biggest aluminum company, on Tuesday over claims a subsidiary had not paid almost $7 million in tax.

In early February, the IC opened a tax evasion case against RUSAL Foil head Igor Kasyanov, who it claimed had failed to pay profit and value-added tax of 200 million rubles.

RUSAL however said the tax claims against RUSAL Foil, its subsidiary, are illegal, since a Moscow City Arbitration Court’s ruling based on those claims has not as yet gone into force.

"The actions of law-enforcement authorities in UC RUSAL office are connected with groundless claims of the tax authorities and investigation department of the Moscow investigation comittee to OOO RUSAL Foil (RUSAL's subsidiary) and to RUSAL Foil management," the company said on its website on Tuesday.

The aluminum giant previously said it disagreed with the tax claim and would appeal the court’s ruling.

RUSAL’s chief executive officer is billionaire Oleg Deripaska, who is also chairman of the Management Board, and member of the Board of Directors. Between 2000 and 2003, Deripaska was general director of RUSAL, created following the merger of aluminum and alumina assets of Siberian Aluminum and Sibneft. Since 2009, he has been general director of Basic Element.

Basic Element holds interests in companies including UC RUSAL (formed in 2007 through the merger of Russia’s RUSAL and SUAL with the alumina assets of Swiss company Glencore).