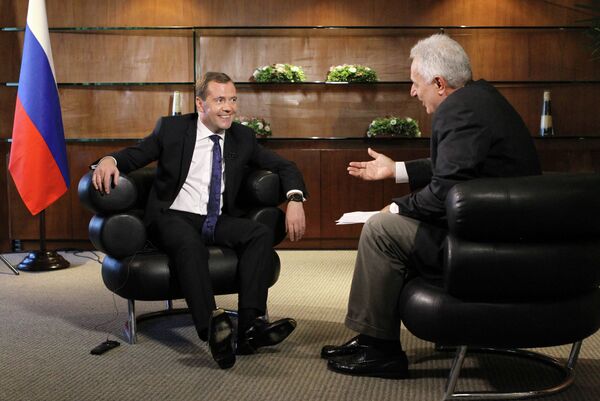 Russian Prime Minister Dmitry Medvedev has again dismissed speculations that the Russian-US relations are entering a new stage of the Soviet-era ‘Cold War’ and reiterated that Moscow and Washington can successfully cooperate on a variety of issues.

MOSCOW, February 26 (RIA Novosti) – Russian Prime Minister Dmitry Medvedev has again dismissed speculations that the Russian-US relations are entering a new stage of the Soviet-era ‘Cold War’ and reiterated that Moscow and Washington can successfully cooperate on a variety of issues.

Medvedev said in an interview with the Globo television, which will be aired on Tuesday, that the relations between Russia and the United States had recently soured over disputes on the so-called Magnitsky Act, the child adoption and missile defense.

“However, there are no deeply-rooted, fundamental reasons for ‘Cold War,’ the prime minster said. “On the contrary, we are capable of jointly tackling a large variety of issues in many areas.”

Medvedev pointed out that it is not uncommon that tensions between countries arise periodically depending on interests and policies pursued by administrations and lawmakers in power at the moment.

He cited the Magnitsky Act as a perfect example of such a development.

“I must say that it is an absolutely politicized, contrived or, as we say, ‘concocted out of thin air’ issue when a previous document aimed against the Soviet Union was replaced with another that has an obvious anti-Russian nature,” Medvedev said.

“Unfortunately, some scoundrels…conveniently used a rather complicated situation with one person to satisfy their political and commercial interests,” he continued.

US President Barack Obama signed in December into law the legislation which simultaneously repealed the Cold War-era Jackson-Vanik restrictions on trade with Russia, establishing normalized bilateral trade relations with Moscow, and introduced visa bans and asset freezes on Russian officials considered by the White House to be guilty of human rights violations.

The so-called Magnitsky Act specifically targets Russian officials considered by the White House to be involved in the death of Russian whistleblower lawyer Sergei Magnitsky in 2009, but it extends to other purported violators of human rights in Russia as well.

The passing of the bill by overwhelming majority in both the US House of Representatives and the US Senate has infuriated Russia.

Medvedev expressed regret that these moves had certainly fueled tensions between the two countries, but reaffirmed that they were inevitable.

“We were forced to respond to these [US] decisions,” the Russian prime minister said.