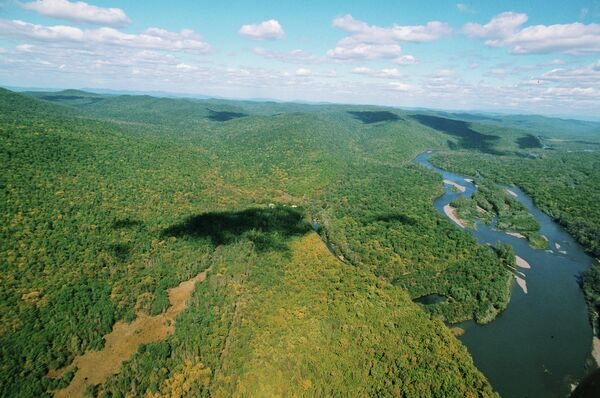 © RIA Novosti . Aleksandr Liskin
/
Go to the mediabank
Subscribe
International
India
Africa
The innocent act of buying furniture in America may make you an unwitting accomplice to Russia’s logging mafia, the World Wide Fund for Nature (WWF) said on Monday.

Illegal logging became an industry with an annual turnover of at least $450 million – possibly far more – in Russia’s Far East, after the Primorye Region ran out of commercial forests, the head of WWF Russia Igor Chestin said at a press conference in Moscow.

An estimated 450,000 cubic meters of timber were harvested illegally in the region in 2011, most of it going to the United States, Japan and the EU by way of Chinese furniture factories, Chestin said.

Loggers are able to encroach on protected forests thanks to flawed legislation and nonexistent law enforcement, though the government is working with the WWF to change the situation, he said.

“We want to cut this Gordian knot, though we’re met with stiff resistance,” Chestin said.

Primorye exported between two and four times more oak than it was allowed to legally harvest between 2004 and 2011, the latest year for which statistics are available, according to a new study by the WWF presented on Monday.

Russia’s oak exports to China may alone amount to $1 billion, half of them illegal, Chestin said. The international Environmental Investigation Agency watchdog estimated Russia’s total illegal timber exports to China in 2011 at $1.3 billion.

Forests fit for commercial use in Primorye, a region of 165,000 square kilometers (103,000 square miles) on China’s northeastern border, were exhausted over the past decade, despite official reports that they comprise up to 30 percent of the territory, Chestin said.

Now loggers are encroaching on protected forests, capitalizing on a rule that allows limited commercial logging there while often exceeding their logging quotas, the study said, adding that outright illegal logging is also thriving in the region.

Most offenders go unpunished: In 2011, only 16 percent of the 691 reported cases of illegal logging reached court, two-thirds of them involving small-scale operations, the study said.

Lack of control over timber is another problem: Once a harvested tree leaves the forest, the Federal Forestry Agency has no authority to check its origins, Alexander Mariyev, a department head at the agency, said at the press conference.

Moreover, Russia’s corps of some 250,000 forest rangers was decimated by President Vladimir Putin’s reforms in the mid-2000s and now numbers only 14,000, Chestin said on the sidelines of the conference.

Most of the timber goes to China, which accounted for 72 percent of all Russian timber exports in 2011, or some 15 million cubic meters, Mariyev said.

Timber is turned into furniture and hardwood floors; exports of these products from China to the United States and the European Union stood at a combined $8.6 billion in 2011, Nikolai Shmatkov, who supervises forestry programs at WWF Russia, told RIA Novosti.

Furniture made from illegal timber is in violation of the US Lacey Act and the EU regulations coming into force this Sunday, both of which prohibit trafficking or usage of illegally harvested timber, Mariyev said.

An investigation of furniture retailers violating the Lacey Act by using illegal Primorye timber is underway in the United States, WWF’s representatives said, though they refused to identify any suspects.

The WWF also launched an online petition drive in Russia to ban timber harvesting in protected forests. A similar campaign on another issue last year gathered 120,000 signatures, allowing a bill on the matter to breeze through the legislature within months.

The Federal Forestry Agency is also lobbying for a system to track timber’s origins during transportation and customs checks, including through GPS tagging of individual trees, Mariyev said, adding that similar systems are already in place in many timber-producing countries such as Indonesia and Thailand.

A bill summing up proposals by the WWF and the state watchdog is currently under review by the Ministry of Natural Resources.

The long-term solution is to switch to plantation forests, as it was done in timber-producing regions of European Russia, such as Karelia, Chestin and Mariyev said.

“It won’t be cheap, but the world’s out of cheap natural resources,” Chestin said.