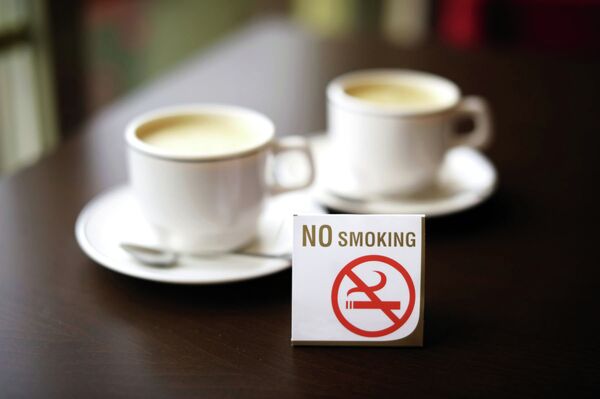 Russian President Vladimir Putin has signed into law a ban on smoking in public places, the Kremlin website said on Monday.

The law envisages a gradual ban on smoking in public, including in government buildings, healthcare and educational facilities, cultural sites, sports stadiums and on public transport.

The law comes into force on June 1, 2013, though some of its provisions, including a total ban on smoking in restaurants, trains and hotels, will only come into effect one year later.

The legislation also imposes a total ban on tobacco advertising. Tobacco companies will be barred from holding promotional prize draws and sponsoring public events and competitions.

The bill also prohibits display of tobacco products in shops. Sales in retail kiosks will be banned from June 2014, and minimum prices will be set for cigarettes, which currently cost just 40 rubles ($1.30) a pack.

Further proposed restrictions to the anti-smoking bill proposed on January 11, in particular banning so-called smoking rooms at work places, were not included in the final version.

Russia signed the Framework Convention on Tobacco Control with the World Health Organization in 2008. This obliges Russia to enact tougher restrictions on tobacco by 2015.

According to a survey conducted by the Levada Center pollster in November, only 18 to 31 percent of respondents supported an outright smoking ban in workplaces, airports, restaurants, bars and hotels, while up to 75 percent believe public smoking should be restricted to specially designated areas.

Around forty percent of Russian adults smoke, according to a 2011 study by Konstantin Kroskovsky - one of the highest levels in the developed world. Smoking among women is now at around 15-20 percent, around double the level it was two decades ago, according to his study.